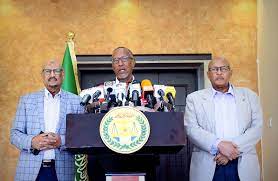 Disputes and political wrangling have started in Somaliland. As usual, it is about contrasting positions of the Somaliland government and opposition political parties over the election processes. Somaliland’s opposition parties, especially Waddani Party, never fail to find ways to dispute a point in the election law. Once, it was the timing of the presidential elections. Another time it was about the dissolution of the national electoral commission. Now, it is about the same timing issue of opening up political parties for the public. In all the occasions, there is a legal foundation for the administration to take the disputed action. For instance, the responsibility of the postponement of the presidential election rests with the Gurti (House of Elders) according to the Somaliland constitution. So, why argue and make noise about that in the media? An ambitious and clever politician would have applied his influence on the Gurti.

In the last presidential elections, Waddani Party made grave mistake. The party leadership officially questioned the integrity of the electoral system. They accused the independent Electoral Commission of rigging the election for Muse Bihi.  Basically, Waddani called the election stolen, and they did so without producing a single proof. They never apologized to the public or to anybody else as of today.

In reality, there should be no complaints about the cast votes because Somaliland uses  highly sophisticated computer-based voting system that is almost immune to fraud. In other words, the election system currently used by the Somaliland Electoral Commission is impervious to massive fraud that could change the outcome. At the time, Waddani tried to make a big deal about a book of ballots lost from probably a dosing youngster in a polling room in Berbera. They tried to invalidate the whole election using this lost and found booklet. They were dumb founded because each page of the ballot book carries the number and the name of the polling station. So, the election commission simply checked the booklet against the ballot boxes of the relevant polling station. As it turned out, the numbers of votes in the ballot boxes were found absolutely correct and matched the document signed by the poll watchers and the commission of the polling station. The polling book they found contained only the remaining unused ballots, bound to be legally returned to the Electoral Commission. Hence, there was no fraud or misuse of documents.

Now, Waddani people are screaming loud about the legality of opening political institutions. I am not a lawyer but I can read and understand piece of legislation. In this case, the Somaliland Law No.14 stipulates that, in every 10 years, new political associations will be allowed to register and compete for becoming political parties. Of course, the existing 3 political parties will be relegated to political associations. Waddani Party is openly opposing the law. No political party can change the rules at their convenience. More importantly, it is a waste of time for Waddani Party to routinely pick up fights with elected presidents who are former leaders of the hardheaded SNM. You cannot force them to discard the law to protect your special interest. If Waddani has wide support across all the regions of Somaliland as they often boastfully claim, they should restructure their party to campaign and easily win in the competition to become a party again. Then, they can try to unseat Bihi in the elections, which would be held on its regular time. Instead, they are engaged on screaming’s. They always try to rub the clan loyalty card, while demanding something that has no legal basis. “It is our turn to hold the presidency, but the government is intentional putting obstacles on the way,” they lament. But this has nothing to do with clan interests. It is the about the ambition of one man, and his methods seem an exercise in futility.

Thankfully, the election cycle of 2021 took place without a single incident. That was remarkable and most credit goes to Somaliland civilian population, the National Electoral Commission and the security services of the Somaliland government.  This time around, it was hailed by all as a fair and free election. It was a demonstration of democracy at its best in Africa.

Even after that amazingly peaceful and well conducted election, Waddani had to come up with a way to instigate crisis. They quickly created divisions among the newly elected parliament. You would think an opposition party will exert efforts to unite the parliament. Somaliland Constitution entrusts sufficient powers on the parliament in order to maintain check and balance in the government. Somaliland have not had effective parliament since 2015 when Abdirahman Irro – current Waddani party candidate – was elected to the speaker of the house. Parliamentarians of the 2 opposition parties (UCID and Kulmiye) exclusively voted for the new speaker and his two deputies. They left out UDUB, although it was the party with the largest number of MPs in the house. Conventional wisdom tells us that the 3 positions – house speaker and two deputies – were designed to enable the concerned 3 parties to share the leadership of the institution. What they did was not the way to create a united and functional parliament; a parliament that has the ability to exercise the powers enshrined by the Somaliland constitution. With unity and cooperation, election of the most qualified and suitable persons have a good chance to take up the 3 leadership positions.

But no, the leadership of the Waddani party doesn’t seem to learn from their experience. They made the election of a candidate preselected by their party to the house speaker as their highest priority. The effects of the divided parliament are upon Somaliland now. Today, the house could not agree to read the law loud and clear. They failed to agree on the fact that 10 years have passed since the last time ordinary citizens were allowed to open new parties. It gives an opportunity to all citizens of the republic to participate in the national politics. If you are one of the existing parties, and you want to take monopoly on the national politics, then you ignore the law. Let us hope the rule of law prevails this time again.

By Mohamed A. Abdullahi – Eng. Dakarre