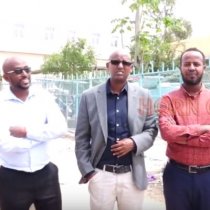 The Secretary General of Somaliland’s Wadani party accompanied by other officials today have visited the chair of the youth wing of the party, Mr. Mohamed Sadiq Dhame and the reporter by the name of Abdimalik Muse Oldon who are behind bars waiting to be brought before the court of law.

Both are held at Hargeisa main prison in Somaliland. Wadani party officials have claimed that the arrest of the chair of the youth wing is politically motivated and has been held in detention for more than 40 days. The officials have argued that Mr. Dhame has not been brought before a court of law as far as his arrest is concerned. They have cried foul for detaining citizens and hold indefinitely is a total breach to the norms of the law of the country. Mr. Khadar, the secretary general of Wadani party has said that Mr. Oldon has been arrested illegally.