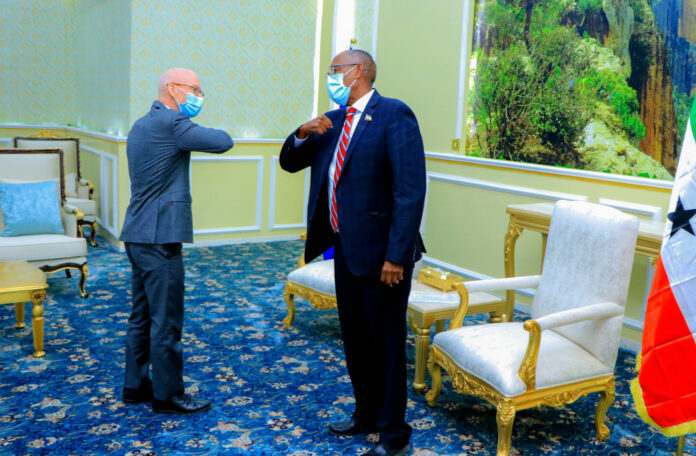 The Government of Somaliland and the United Nations has had a rapport that focused on the procedural working relations.

A statement from the Presidency signed by the Presidential spokesperson Mr. Mohamoud Warsame Jama noted that the Head of State H.E. Musa Bihi Abdi met with a large delegation of UN officials led by Amb. James Swan, hence they pondered at length on various aspects of bilateral importance, mainly being the procedural inter-working relationship as concerns engagements in development partnership.

The Press Release said that Somaliland-UN partnership on fundamental planning and programmes were issues focused on in as far as procedures were concerned.

The meeting agreed upon that a further consultation was to continue on the aspects of the inter-working relationship.

They also discussed on the ways and means that the UN can possibly aid in the electioneering processes going on in the country, given that upcoming parliamentary and civic elections has been earmarked to be held by the end of May, this year.

Updated reports add that Somaliland and international partners have just reached accords on re-invigorating interworking relationships in a meeting held in Nairobi on Thursday. (See story elsewhere in this issue).

It is worth noting that the government of Somaliland had suspended working relations with the world body for its (UN) failure to separate the entity of Somaliland as not being a part of Somalia in the development plans the UN helped put in place for the next five-year sessional paper on development.

The stringent measures to separate the two, demanded by the Somaliland government has propped Amb. Swan who happens to be the UN Secretary General Special Representative to the region to seek the rapport with the administration here in Hargeisa to salvage the interworking relations and partnership.

The UN official at the Presidency meeting hailed the administration of the government of Somaliland, the official Political Parties, the National Election Commission (NEC) and the people of Somaliland at large for having wholeheartedly prepared themselves to participate in the elections readily and in solidarity.

Peace and security in the region as a whole were also discussed during the summit.

Several officials from amongst his staffers flanked Amb. Swan.