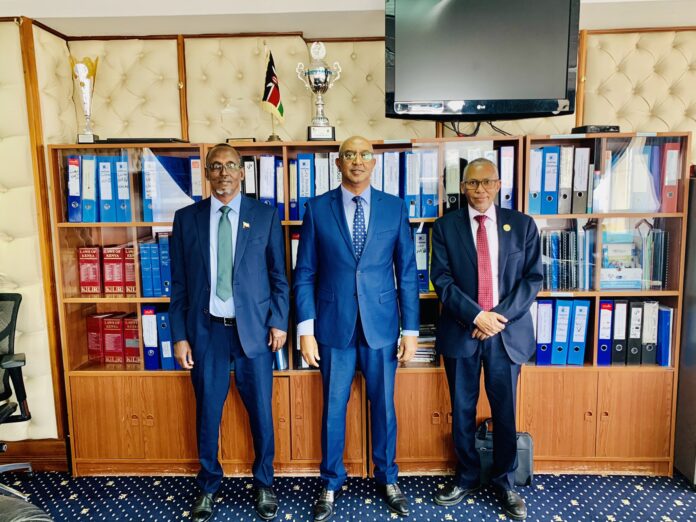 The delegation led by the Minister of Finance Hon. Dr. Saad Ali Shire, with Minister of Planning Hon. Hassan Mohamed Ali, and a senior official from the Ministry of Foreign Affairs on Thursday met with 16 ambassadors and representatives of the World Bank, the European Union and the United States Agency for International Development in Nairobi.

The meeting organized by the Somaliland Embassy in Kenya and held at the residence of the Danish Ambassador Hon Ole Thonke, discussed wide-ranging issues.

Somaliland Ambassador to Kenya Bashe Awil Omar, who briefed Dawan newspaper on the purpose of the meeting and the issues hence noted that he Ambassador of Denmark, Hon Thonke, explained his visit to Somaliland the previous week and the talks held the President of Somaliland, H.E. Muse Bihi Abdi, regarding preparation of election etc.

Ambassador Bashe said that the Minister of Planning Hon. Hassan Gafaadi, spoke about the co-operation between the international community, the government’s decision to suspend cooperation with UN agencies and the latest talks between UN Special Representative Mr Swan and Somaliland.

Similarly, Minister of Finance Dr. Saad Ali Shire briefed the international community on the areas that the Somaliland government needs support and the process that can be followed.

Ambassador of Denmark H.E. Thonke speaking on behalf of other diplomats and representatives stated the understanding has been reached to continue cooperation and ways of achieving lasting solution structure or system Somaliland and donors to work together in future.