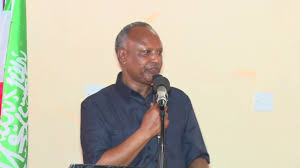 HARGEISA– Mr. Abdilahi Mohamed Dahir aka “Cukuse” who served as presidential spokesman, information minister and the minister for livestock during president Ahmed Silanyo’s administration will be reinstated as the spokesman of the ruling Kulmiye party. He is expected to employ in his power of oratory to defend opposition critics and scathing attacks from the governing party and the government. The news was quoted from Geeska Afrika, a local paper published in Hargeisa, Somaliland capital.