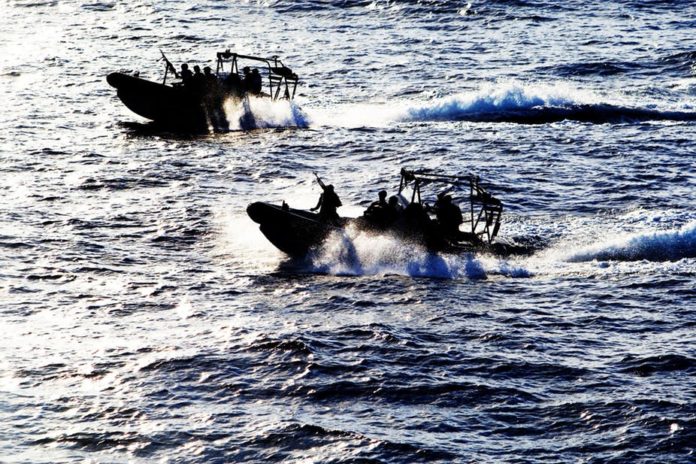 The world’s oceans are at the centre of transnational organised crimes committed by profit-driven networks operating across borders. The United Nations Security Council recently convened to discuss the threat this poses to international peace and security.

While Somali piracy in the Western Indian Ocean focused the world’s attention on the oceans, numerous other transnational organised crimes are taking place across the globe.

Piracy and armed robbery are also found off South East Asia, in the Gulf of Guinea and is re-emerging in the Caribbean.

In the Mediterranean, migrant smugglers are responsible for the drowning of thousands of African migrants. And all across the globe, illegal, unreported and unregulated fishing is threatening coastal livelihoods and fish stocks.

When it comes to countering transnational organised crime at sea, the response to Somali piracy is the greatest success story. It’s exceptional because it actually worked.

How were Somali pirates stopped?

The response to Somali piracy was set in motion in 2008 when the UN Security Council passed Resolution 1816. In terms of international law, piracy is a crime of universal jurisdiction, meaning any state may act against it on the high seas and in exclusive economic zones. Resolution 1816 went further by authorising foreign states to also enter Somalia’s territorial sea to suppress piracy.

Such authorisation is given when the use of force is justified to protect international peace and security. More resolutions have since followed.

The result was an inter-State, inter-agency and public-private response involving a number of players. These included states, the shipping industry and other stakeholders like the United Nations and the International Maritime Organisation. These actors formed the Contact Group on Piracy off the Coast of Somalia. This, in turn, was split into working groups whose members implemented and coordinated the counter measures.

The all-encompassing response came together as follows: International navies would escort vessels through the High Risk Area and shipping vessels would employ shipping self-protection measures, such as hiring armed guards. Both navies and armed guards would then respond to attacks and apprehend suspects.

Law reforms in regional countries ensured that piracy was an offence in domestic legislation. This allowed suspects to be handed over to regional states for prosecution. This was facilitated by a regional pirate prosecution model and capacity building projects. These ensured that regional courts were enabled to try pirates and criminal justice practitioners were trained to prosecute piracy. Regional prisons, including in Somalia, were then built or improved to house convicted pirates.

In addition, capacity building projects focused on building the capacity of regional maritime law enforcement entities. There were also land based development programmes aimed at the causes of piracy. These included counter-piracy messaging and alternative livelihood programmes.

Many of these measures are still in place today, although many have taken on a different form.

But the problem off the coast of Somalia hasn’t been entirely solved. Piracy is a product of the fragile situation in Somalia. Yet land based responses were negligible in comparison to those aimed at sea. This failed to meaningfully address the causes of piracy, which is arguably evidenced by renewed attacks.

This is a universal problem – law enforcement measures without simultaneous efforts to address the causes of crime – will be a never-ending endeavour of mere suppression.

Copy and pasting the counter-piracy response would be unrealistic. This is because international laws applicable to the different transnational organised crimes at sea allow varying  interdiction regimes.

Nevertheless, the piracy response holds many clues as to what constitutes an effective response to organised crime at sea. Three counter-measures are particularly noteworthy.

First, no single entity can counter a transnational crime. As the Contact Group on Piracy off the Coast of Somalia has shown, transnational crimes require collaboration and pooling of resources on a regional and international level by all those affected.

The response worked because it was in partnership with the shipping industry. Massive quantities of illicit goods are moved in containers on commercial shipping vessels. Yet, the relevant industries are missing from counter-measures, leaving under-resourced and overstretched borders and ports to detect illicit shipments among masses of licit shipping.

Second, the counter-piracy response has shown that disrupting the logistics of an operation breaks the business model. For example, the current practice on the high seas of the Western Indian Ocean heroin trafficking route is to seize the heroin and let the crew and vessel go, leaving the vessel free to return with another load. Countries like Indonesia have solved this by destroying vessels engaged in IUU fishing in Indonesian waters. Trafficking vessels can be forfeited if national laws provide for this.

Finally, if international law has limited options, states must lobby for a Security Council resolution authorising additional counter-measures. Resolutions like this were passed on Somali piracy, as well as the Mediterranean migrant crisis.

Interests, corruption and political will

Paramount to all the above is the will to act. Piracy threatened world trade. The same can’t be said for crimes like drug or wildlife trafficking. A better understanding of the interests threatened by other forms of crimes at sea is therefore necessary.

It seems that growing drug addiction, dying migrants and dwindling fish stocks fail to move the international community to decisive action. But the detrimental effect on governance and corruption should get their attention. Across the globe, there are people in power with an interest in sustaining these illicit flows and until they are eliminated, any counter-measures will be a drop in the ocean.