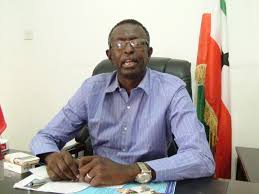 The leader of Somaliland’s Justice & Welfare Party, UCID, has reinstated on Thursday the former interior secretary, Mohamud Ali Suleiman alias Ramaah. Mr. Ramaah was dismissed from the party after he rallied behind the call of the President, His Excellency Musa Bihi Abdi, for an early opening of political associations, which, if implemented, would have cut the life of the three national political parties by two years. In an official statement issued by the party and signed by its chair, Faisal Ali Warabe, has reinstated Mr. Ramaah as the new secretary of Welfare and Social Affairs of UCID party. Raage Yusuf Ahmed has been appointed as the Finance Secretary. Ali Suleiman Mohamud has been named as the Public Works and rebuilding of UCID’s Party. Yusuf Kayse Abdilahi has retained the information secretary and media relations post of the Party. Bashir Hassan Hamri- Civil aviation secretary. Abdikani Ibrahim Salaf-Coordination of regional district secretary Abdiweli Hussein Ganbiye-Security Secretary. UCID’s Chairman has made closer look at the party’s regulations, has consulted with senior party officials and the executive committee. He has reached the decision to appoint the above positions.