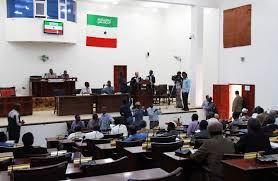 The parliament session which is due to transpire tomorrow (Saturday) which the joint house of legislators are due to either pass the state of emergency law or reject has been postponed.

The parliamentarians have been informed that the parliament won’t convene tomorrow as planned.

The legislators were also informed that they have to continue the two month recess.

Majority of parliamentarians have opposed the imposition of state of emergency that the Head of State declared for three townships in Sanaag province after two police officers were heinously gunned down in action.

This prompted the president to announce that the armed forces should takeover the administration of the districts.

It is not yet clear the reason for delaying the parliament session where the legislators from both houses were due to meet for second time to oppose or pass the imposition of the state of emergency.

It was on last Thursday when the joint session was adjourned after majority of parliament members showed their opposition to the law.