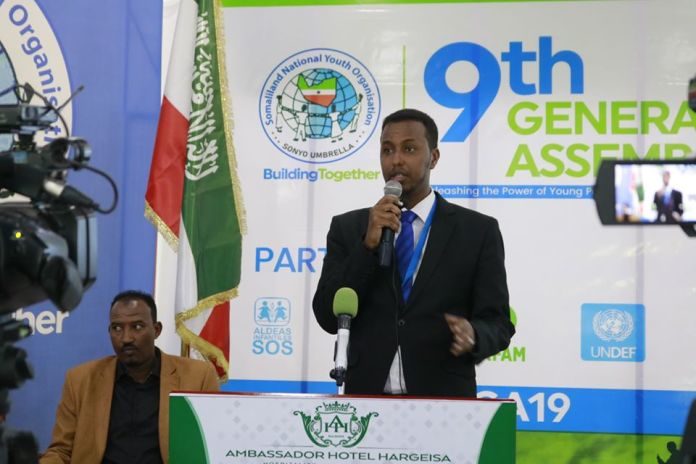 The Minister of Youth and Sports Hon. Boss Mire congratulated the Somaliland National Youth Organization (SONYO) on the occasion of their 9th General Assembly whose meeting came to a close yesterday culminating with the election of a new chairman.

The Minister who was the guest of honour gracing the function also carried a similar message of congratulations from the Head of State E.E. Musa Bihi Abdi.

The new chairman is Mr. Abdiaziz Mohammed Jama who replaced his namesake Mr. Abdiaziz Said Salah who held the post for the past three years.

A new twist of event hitherto unknown to SONYO hierarchy hullabaloos saw the new head of the umbrella youth organization to have been elected through a consensus appointment rather than the electioneering rigours dotted with tensions.

The organization was known to undergo bitter campaigns that the outgoing chairman has decried.

He said that SONYO has leapt over the hurdles that threatened to tear the institution apart due to rivalry during high-fever pitched campaigns and sought the path of consensus to hold the bonds together.

He urged the state to fund the youth organization such that articulate and developmental aspects may be realized.

On his part, his incoming namesake thanked the former chairman for steering the institution to greater heights.

He specifically thanked two aspirants for the post who stepped down for the need of common bond and cohesively harmonious grounds to be entrenched in the organization.