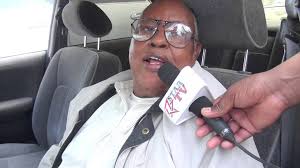 The President H.E. Musa Bihi Abdi has sent deep and heartfelt condolences on his own behalf that of the government and the nation at large on the demise of veteran politician and former charismatic city mayor the Late Awil Elmi Abdalla who passed away yesterday in Hargeisa.

The Head of State condoled the family, relatives and friends of the deceased wishing them stronger faith in the event of the trying moment.

He described the late Awil as a patriotic leader and participant in the successive struggles of the nation in the past three decades hence termed him (the deceased) as a stalwart in the peacemaking and rebuilding efforts of the nation.

He specifically noted the monuments the late mayor personally saw to their eventual installation that has left landmark memories of the nation.

The best example is the world re-known image of the Mig fighter plane at the city square which happens to be one of the crafts that bombarded the city in the late 1980s that is recognized all over the world.

The late Awil passed away after a long illness bravely borne.