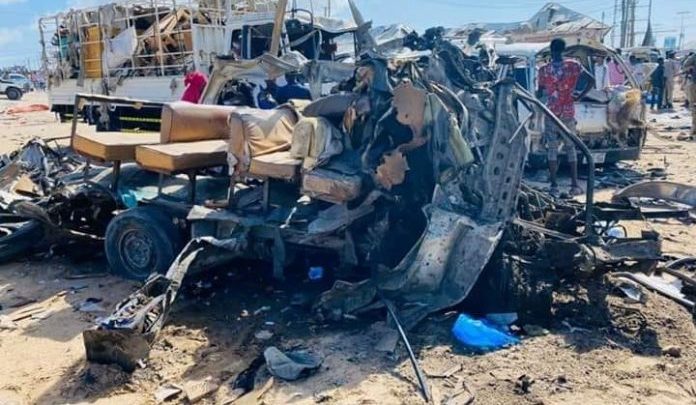 MOGADISHU—A car loaded with explosives went off at ex-control junction early during the rush hour on Saturday.
70 people were killed in that attack so far. Along them there were 20 university students whose bus was caught up in the car bomb attack.
The casualties also include security officers manning the checkpoint, small business owners and pedestrians.
Foreign nationals were confirmed to be in the victims.
Omar Mohamed Mohamoud, the Mayor of Mogadishu while visiting the scene of the explosion said that the number of casualties might increase.
Member of the public are drawing parallels between the bombing and the biggest attack that Mogadishu has ever seen.
Almost 600 people perished in the twin blasts dubbed Soobe raid in 2017.
The blast comes at a heightened security across the capital in the past couple of months to prevent such attack.
Surveillance cameras were set up on over the streets of the capital so as to prevent the terrorist attacks.
No group has claimed the responsibility of carrying out the attack so far.
The Mayor of Mogadishu blamed it on the armed extremist group of Al Shabab.
The deadly group has carried out similar attacks in the Somalian capital targeting the Federal Gov’t Installations and business centers.
Meanwhile, Somalian President Mohamed Abdilahi Farmajo addressed the nation after the blast that claimed 70 lives in Mogadishu.
Farmajo condoled the families and the loved ones of the victims of the terrorist attack and called them martyrs.
He prayed for the speedy recovery of all injured people.
The President said the victims included poor people going to work in the morning to provide the livelihood for the families.
Farmajo said that the target of the terrorist attacks showed their commitment to massacre the people of Somalia.
He said the purpose of the attack was to terrorize the people and the gov’t of Somalia so as to succumb to despair.
The President directed all gov’t agencies to provide relief to the victims of the raid.
At the same time, Somalian Prime Minister, Hassan Ali Khaire has canceled a trip to Dhusamareeb.
The planned trip to travel to Galmudug state was aimed at resolving the political impasse that has left the elections of the state in limbo.
The PM of the SFG, Hassan Ali Khaire has appointed National Task Force in order to coordinate emergency repose for the victims of today’s terrorist attack in Mogadishu.
First, the PM has extended his condolences to the victims of the attacks and the committee will coordinate the relief and assistance efforts to those who have lost their lives and loved ones.
Hassan Ali said the gov’t will send the most affected victims who require specialized medication outside the country.
The PM has called on the members of the public to pray for the victims and further promised the gov’t will intensify its operations aimed at flushing Al Shabab militants from Somalia.