“It infringes upon Somaliland’s sovereign integrity and violates its internal affairs”, states the government.

“The UN and Somalia’s agreement on the sustainable development cooperation framework infringes upon Somaliland’s sovereign integrity and violates its internal affairs” is the declaration of the government on a quite notable day.

It also asserted that Somaliland was not part and parcel of the Somalia administrative regions, was never part of it and will never be.

Yesterday, the 17th October, 2020, happens to be the national Martyr’s Day observed in the country, a day Somalilanders remember their own who formidably fought for the re assertment of the country’s sovereignty declared on 18th May 1991, which hitherto, was initially attained on the 26th of June, 1960.

It is notably on this Martyr’s, yesterday, that the government of Somaliland took to remind the International Community of its independence and sovereignty that the United Nations and Somalia violated two days earlier on, following an extra-ordinary a cabinet meeting chaired by the Head of State H.E. Musa Bihi Abdi.

The council of ministers decided that the UNCF agreement with Somalia on sustainable development indeed violated the sovereignty integrity of Somaliland and infringed upon its internal affairs. It warned that no amount of intimidation would sway the country off its course of its aspirations and cause.

On the same note the meeting directed the line ministries, presumably the planning, foreign and interior ones to give a detailed circular surrounding the circumstances.

The meeting reminded the international community of this country’s resolved on its aspirations three decades ago in which it had been virtually independent, something well known, cautioning that it won’t give in to any economic, political or propaganda intimidations.

The rebuffing of UN/Somalia agreement was contained in a Presidency circular to the media signed by Presidential spokesperson Mohamoud Jama Warsame.

On the other hand the cabinet meeting discussed the Fly-Dubai and Air-Arabia saga that saw the two airlines barred from a flight route plying into the country.

The meeting decided that the ban should be continued until legal agreement measures are put in place and applied, that the flight agreement be solidified and that efforts towards such agreement should be putting into consideration the boosting of the country’s economic perspective.

The ministers took the opportunity to salute the nation on the auspicious Martyr’s Day as concerns all concerted efforts put forth by the veteran struggle leaders and fighters, the poetic and cleric fraternity, the intellectual and benevolent groups and all the country folks at large who did their part throughout the struggle.

The ministers pointed out that the state and nation of Somaliland should as a whole preserve their revolutionary heritage at all costs, and times. 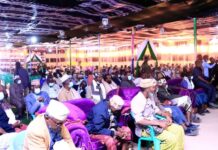