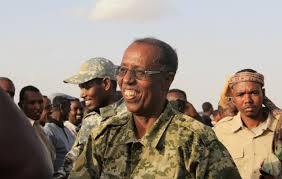 Just days after giving amnesty to 14 militia members from Puntland who were captured in the skirmishes around Tukuruq in Sool region, President Muse Bihi Abdi, has received his reply; Puntland has threatened to attack and occupy the whole of the Sanaag region.

According to Puntland officials in the town of Badhan in eastern Sanaag, “the time has come for their militia forces to engage the Somaliland Defence Forces and take the whole of Sanaag including the regional capital, Erigavo”.

The eastern fringes of Somaliland which is populated by communities who share common kinship with the majority community in Puntland, have long since been a source of friction between Hargeisa and Garowe.

The Republic of Somaliland points out that these areas are within it’s defined borders of independence on the 26th of June, 1960.

Meanwhile the administration in Garowe is under the impression that the population in that area form a community kinship to those in their territories and are part of their fiefdom.

Since the reclamation of sovereignty by Somaliland in 1991 and the creation of the regional administration of Puntland in 1998, these areas in the eastern districts have seen much conflict and hostility between the two parties.

However, with the appointment of a new, urbane and educated leader in Garowe, many had hoped that a new chapter could begin between the Republic of Somaliland and Puntland.

Sadly, this has not been the case. Since the beginning of the year, at least three separate incidents have flared up between the Somaliland Defence Forces and the militia from Puntland which have led of the loss of lives and the upheaval of many communities in the area.

This recent threat by the administration in Puntland, which many believe is being instigated from further south in Somalia, appears to be a prelude to more hostilities.

It remains to be seen whether the administration in Puntland can carry out it’s threat and what kind of response the Somaliland government gives.