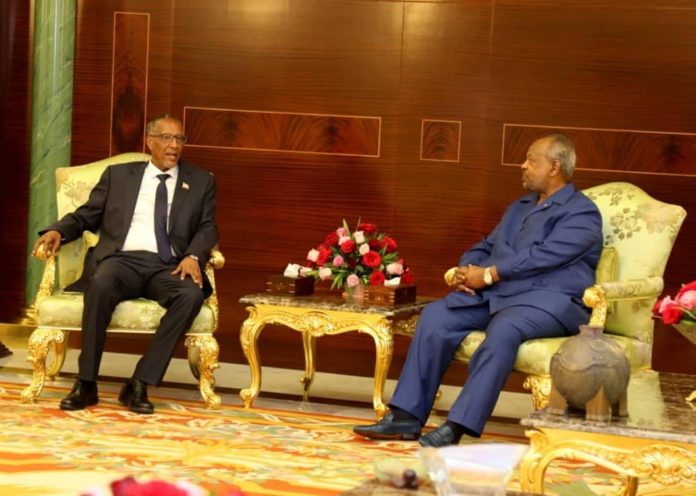 Somaliland’s quest to cement strong ties with Djibouti moved a notch higher with president Muse Bihi’s visit to its neighbours on Tuesday.

Bihi is in Djibouti on invitation from President Ismael Omar Guelle.

Top among the talks will be security in the horn and stronger socio economic ties between the two countries considered key in maritime business.

Somaliland is expanding its Berbera Port while Djibouti is opening its ports for more business.

This is President Bihi’s second visit to Djibouti since his election two years ago. He has also visited Ethiopia who is also Somaliland’s partner in management of the Berbera Port whose expansion is being handled by the Dubai company DP World.

Bihi departed from Egal International Airport to Djibouti accompanied by three ministers from the ministries of Foreign Affairs, Defence, Agriculture and Investment.

Somaliland is not recognized internationally but enjoys close ties with her neighbouring Djibouti, Ethiopia and Kenya.

“Our mission to Djibouti is to cement our close ties and seek further ways of working together in different fields,” an official from Somaliland Foreign Affairs Ministry said.

Somaliland, Djibouti, which is emerging as a hub for foreign military installations, has found itself at the centre of big power rivalries that could reshape the Horn of Africa.

Somaliland itself was created during the 19th century, when the Horn of Africa was carved up by European powers. Contemporary Somalia is a composite state, formed in 1960 when two former colonial territories, British Somaliland and Italian Somaliland, were fused together. Meanwhile, Djibouti, which was once labelled French Somaliland, became independent in 1977.

Djibouti and Somaliland have predicated their development models on attracting powerful foreign militaries. As the region continues to emerge as a site of competition for both regional players such as the UAE and Qatar and global powers such as China, Japan, and the United States, this is a strategy that risks embroiling the region in dangerous international rivalries.