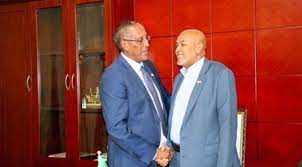 Somaliland President Muse Bihi Abdi met with the leader of Waddani opposition party Abdirahman Abdillahi Irro at the presidential palace on Tuesday amid a dispute over a decree authorizing the registration of new political associations ahead of elections slated for November.

The meeting is the second between Bihi and his main arch rival in just a few weeks. It follows a visit by an EU delegation whose members held talks with Somaliland government top officials, opposition parties and the electoral body to discuss efforts to ease tensions over a potential delay to the upcoming presidential election.

Earlier, Somaliland President Muse Bihi Abdi said 10-year constitutional terms of opposition parties had expired and issued a decree authorizing the registration of new political associations, drawing a rebuke from opposition leaders, who asserted that the move aimed to delay the presidential vote.

Opposition won majority in parliamentary elections held last year and accused the ruling party of using delay tactics by authorizing the registration of political associations. The leaders of Waddani and UCID parties earlier said the presidential election must be held at its due date, warning against possible delay.