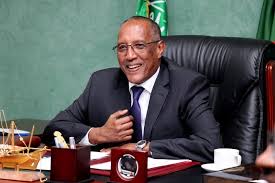 HARGEISA–Somaliland Representative to the United State of America, Hon. Rashid Mohamed Nuur a.k.a “Garuf” has been dismissed in a reshuffle carried out by Somaliland’s president, H.E Musa Bihi Abdi on Monday. SL representative to the United Arab Emirates, Hon. Bashe Awil Omar is shifted to be the head of mission to Kenya. Hon. Hasan Hirad Yasin will be the head of a mission to the UAE after his predecessor was moved to Kenya. Hon. Bashir Omar Goth is now the new head of Somaliland mission to the US.

Mr. Abdilahi Abdi Ali a.k.a “Dhakaar” is named to be in charge of Somaliland representative to IGAD and the East African Community (EAC). The president also named Hon. Hasan Ahmed Ibrahim a.k.a “embassy” as the new manager to be in charge of Berbera Oil Terminal which the Head of State has re-nationalized after the ex-president privatized it. The sacking and the appointment of new officials into the administration was revealed in a presidential decree number JSL/XM/WM/222-179/082018 which was issued by the presidential spokesman.