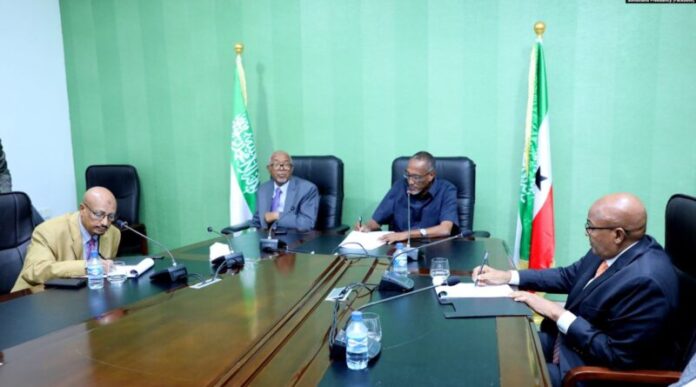 Last May,  Somaliland held the second legislative elections since 2005, to elect a new legislature. The results of the election were not definitive, because no single party won enough delegates to control the speakership post. Therefore, there has been a flurry of brinkmanship in Hargeisa among the Kulmiye and Wadani party apparatchiks, to win enough votes for the speakership position. Each faction is supporting their respective candidate for the position:  Kulmiye party is backing Mr. Yasin “Fartoon’ Mohamoud, former foreign Minister, who hails from Sool region to be the next speaker of Somaliland parliament. While Wadani/UCID parties are fighting tooth to nail for Abdirazak Khalif  former operator of a failed money transfer business, a Somalia apologist protégé of Hersi-Gaab, to win the position.

Initially, before even the votes were counted, Wadani and the Welfare and Justice party (UCID) have agreed, in a backroom deal, to form a coalition to control the legislature and local mayors, to check in the excess and the massive corruption of Kulmiye party presided for the past decade. But that coalition is now cracking. There are reports some MP’s have defected to the Kulmiye—the party that controls the executive. branch. Wadani/UCID leaders, as usual, started whining and accused President Bihi of stealing their MPs.

But Cirro, the Wadani leader and Faisal Ali, the UCID party leader, know well the current political system—the legislators represent the sub clans and not the party that nominated them. We do not have political parties that are cohesive, based on ideas, policies, or platforms.

In fact, Somaliland Parties have become somewhat a charade, not just because they failed to address the pressing issues and concerns of ordinary citizens, but because they are nothing more than a vehicle that are quickly discarded into the junkyard once they have done their job—winning the office of the presidency. Then the winner of the presidency and his cabinet Ministers use the executive power as a conduit to loot state coffers and foreign aid to benefit their own families and the entrenched predators from money transfer and telecommunications operators who pay little  or no taxes.

For example, the UDUB party came into power in the disputed 2003 presidential election; it also won the largest seats, 33, in the 2005 legislative election. However, after losing the 2010 presidential election, it disappeared from the political radar. Majority of its legislators joined the ruling Kulmiye party for their own personal interest. If we had a political party system based on ideas, policies, ideology, UDUB would not have become oblivion.

Wadani was formed right after the 2012 rigged local elections and is largely synonymous with its leader Cirro, and his die-hard Gar-Xajis Sub-clan supporters, who still believe that he won the 2017 election.

How candidate Cirro, other failed Wadani politicians would react if Mr. Fartoon becomes the new speaker? Would Cirro supporters accept the result or start an insurrection again?

What is the difference between Wadani and Kulmiye?? What will it accomplish that Kulmiye has not? What is Wadani’s promise for its supporters, mainly Gar-Xajis, should it win the presidency in 2022?

For instance, on the national security front, what would the Wadani Party do about the Yemenis fishermen who are plundering our fish resources in the Sanaag coast—Xiis and Maydh townships? Dozens of Yemenis boats guided and protected by bad actors from Puntland have been decimating our natural sea resources.(Please watch the above video  starting on the 10th minute).

A political party is described, “a group of persons organized to acquire and exercise political power. Political parties originated in their modern form in Europe and the United States in the 19th century, along with the electoral and parliamentary systems, whose development reflects the evolution of parties.”

They have platforms and strategies to execute policies and programs for the society, especially their supporters such as to improve the living conditions, public safety and creating jobs.

But the current fight between Kulmiye and Wadani/UCID parties over control of the legislature is just a noise to distract from addressing the problems our people are facing daily such as abject poverty,  lack of basic services, skyrocketing utility cost, broken education system, and crime and lawlessness.

What Somaliland people need is more freedom and not less on the political space. We must repeal section 9.2 of the constitution to allow more political parties. Doing so would make Somaliland a more pluralistic democracy. The charade of two-party monopoly must end now.