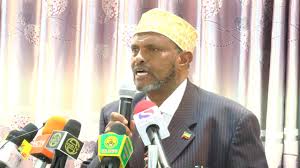 He reprimanded the gov of Somaliland in which it granted military facility to the UAE before all security measures were put in place in order to protect the security of the port of Bebera. He revealed that having Somaliland DPW signed the port modernization agreement, then the UAE covertly agreed with SL to grant military base. The VP cautioned the security repercussions of the military base from day one once SL inked the deal with the UAE.

The former VP made the remarks in an interview with local Somali television. He stated that if war erupts between Saudi led coalition and Iran which is allied with Houthi rebels in Yemen, that would put Somaliland security in danger. He also warned that the war would stop the trade route in the Red Sea as that would isolate SL economically. The ex-VP has added that the port of Berbera and its fuel facility locate in a place that is vulnerable to missile attacks from the Houthis in Yemen. He said that if the UAE military facility opens and the UAE brings military personnel to the base, there will be the possibility of attacks from houthis. He also castigated the UAE for not putting all security measures of protecting against any attack from the houthis in the port.

Houthis in Yemen recently launched missile attacks to Saudi Arabia which wrecked havoc on Saudi airport. The former VP has advised that the UAE must postpone the opening of the military base and bring destroyer missile attacks from Houthis. The ex-VP also disclosed that Somaliland does not have food storage that is enough to feed its citizens in the midst of war that may erupt in the Red Sea.