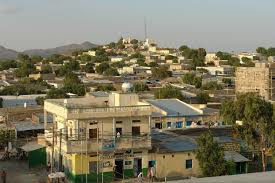 Before I start my story, I send condolence to the families of two officers
who were killed premeditatedly while they serving the Nation. We expect
from the President to bring to the justice to those who did horrendous crime
and those Gov. officials who disregarded their SOS message.

I’m not politicizing the issue, but telling the reality that every law abiding expected.
Borama is my destination to go every year to be away from political
media bombardment here in America. Within a year, you see tremendous
changes in buildings which is sources of lower income people. The City so
expands that that you wonder if utility supplies of water and electricity
can cope with the expansion. In the morning when I get up I prefer to
walk for a mile, but you hardly get some one who accompany you. So I
miss walk and talk. Then, after that I call friend and ask which Hotels we meet
among the four luxury Hotels. You go and sit with number of people
for 3 to 4 hours and chit chat with current affairs. People avoid
political discussion to avoid confrontable issues. They prefer
to hear laughable discussion. At times you see some one greeting
with your name and yet you can’t say his name out of memory lapse.
The waiters serve mostly tea with ginger, but also if you prefer juices
extracted from papayas and orangs whose prices bit high. What is
amazing is every one volunteers to pay the bill of the day unlike
in America where individualism exists.

By I:oo PM, every body goes home or Masjid for pray. This is
the daily routine pass time. Some times you wonder how the 4
luxury Hotels pay their expenses. Majority of the customers order
tea and you rarely see people ordering lunches. On top of that, there
are no sufficient gusts to fill rooms. Once and while you see tourists
coming from Hargeysa. With all that odds they survive to pay their
expenses. The only two days I change my routine pattern were
my visit to Amoud University and also agriculture project initiated
by an entrepreneur, Abdi Farah Good from Djibouti. With regard to the University
it has made an impact upon the growth of the City which reached cosmopolitan
size. Somali people from different Regions settled the City. If you ask them
why they have chosen Borama, they will tell you for two reasons namely peace
and education .I had the opportunity to address the full faculties students and lectured
about Agricultural Development. My two friends, Ahmed Geedi, educator and Osmali Baydaani
who is soils and solar scientist contributed lively discussion. About America, I told them that
for foreign professionals, like them they can’t get decent job unless they do career changes.
With agricultural degree, all science subjects are complete, but in order to be full teacher,
they should take missing educational subjects to earn teaching certification. Being bilingual
in English and Somali is a plus to be hired in Schools were are predominant Somali students.
My day with the students was enjoyable.

We visited Agricultural project initiated by an entrepreneur, Abdi Farah in
an area located Saw mountain ranges. He brought heavy agricultural machineries
and planted high quality vegetables. He also, starts building Green House to grow
inside different crops round the year. He dug two water wells in different spots
and people living near the Project greatly benefitted. I told him to grow exportable
fruits, like oranges which is highly demanded in international markets and bring hard
currency. He had already plan to bring grafted orange seedlings from Brazil of
the popular Valiancy variety. This is the Project I tried number of times to convince
the Ministry of Agriculture but got nothing but duff ears.

The City is the host of an limited dogs ,undernourished searching foods in the
trashes dumped along side walks. They are available in every streets day and
nights. Their birth rate is so fast to the extent you see them every where.
You hear unabated barking at night, perhaps fighting an intruder in their areas.
I don’t know if ever was reported Rabies disease from dog bites.

The problem of the dogs is beyond the City authority. It is high time that
the Government launch an appeal to International Animal Lovers to assist
solution to this alarming dogs problems. There is a curse from Allah if his
creatures die because of food starvation.

I hate to talk about politics but I can’t desist to mention points of great concern.
Somaliland reached great leap forward in many political and economic sectors.
However, the current dead lock about holding election will put the Country great
Leap backward. The exchange of tit for tat in the media should be avoided and discussion
based on spirit of win-win with a climate of gentleman ship should start. The people are
are fed up with the current deadlock so are the International Communities.