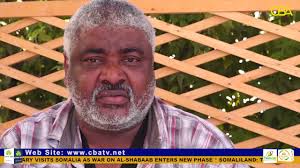 The number of people living with heart problems has risen globally so may get donors to help them with their heart operations as well as transplants.

The 53 year-old man with heart problems lives in Hargeisa for the past 3 years after he received the shock news of his parents death.

Ibrahim Mohmed Yusuf, a former doctor by profession who lives in Hargeisa, the capital of Somaliland has been living with heart problems for the past 3 years. When he speaks to you, you can feel the pain but he is trying to show he is still resilient.

The appearance of his body is a description of the exhausting pain he has endured.

Physically you may think that he is a corpulent man but in reality he is not and event cannot trek to long distances.

This is the 53 year old man said that he first experienced heart problems was when he had received the shocking news of his parents death in a car crash.

He has now been living in this ventricular assist device for the past 3 years.

He said: ” My parents when travelling to another region. Five hours later, I received the shocking news of their death in a car crash. The shock of that moment damaged one of my coronary artery.”

Ibrahim credited female Djibouti national for helping him with his previous heart operation  after she linked him to the French troops based in Djibouti and eventually facilitated his surgery.

He told that this is the time to replace his ventricular assist device that he has been living with for the past three years as it had been operative for a long time.

The ventricular device will add much to his life and said that he needs to replace it but he is not financially sound while he said that his life depends on it  how the community responds urgently with his plea.