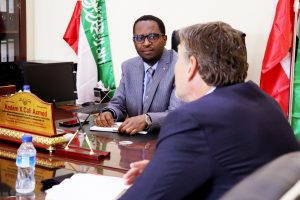 The meeting was held at the Supreme Court.

In this regard, they exchanged views on ways to strengthen the ties between SL and Denmark.

Ole Thonke paid his first visit to Somaliland since his assumption to the ambassadorship.

Ole Thonke said that they are ready to cooperate with SL on various spheres.

He commended the job done by the judicial reforms spearheaded by the Chief Justice which is aimed at reforming the country’s judiciary.

Chief Justice has welcomed the boosting of ties between Denmark & Somaliland.

He called on Ole Thonke to support workshops aimed at training the judiciary in Somaliland.