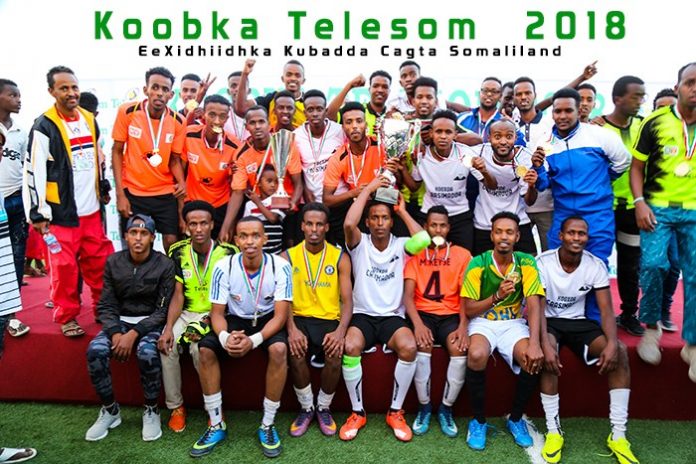 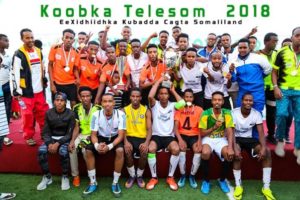 The Hargeisa Local Council football team has made history by winning the inaugural football championship sponsored by Telesom company.
The tournament that ended with the City municipality winning three trophies had 29 teams in participation with a total of 850 players and 58 coaches.

During the entire competition at the Hargeisa stadium that took from from the 17th to July to 21st Sept 2018 all matches were broadcast live courtesy of a partnership between HCTV and Telesom company the official tournament sponsor.
To official end the tournament and award winners was the Somaliland Vice President Abdirahman Abdilahi Sayli who was accompanied by the prisons service Commander, Deputy Hargeisa Mayor, Ministry of youth and sports officials as well as senior officials from Telesom company.

While commending all participating teams for their sportsmanship, VP Sayli also congratulated the victors and runners , Hargeisa Municipality and Prisons Service Football clubs, whom he, VP, also awarded trophies to.
The Vice President also took opportunity to mention that the just concluded football tournament was a pride for the entire country since it’s the only of its kind to ever take place anywhere within somali speak mg countries.
“Congratulations to the Somaliland football federation, Telesom company and HCTV for organizing, sponsoring and airing this inaugural football tournament in the country” said VP Abdirahman Sayli.
Finally the VP award medals to Somaliland to the victorious Hargeisa Municipality Team, runners up Prisons Service as well as to the Telesom football championship’s, top goal scorer, best player, coach, and referee.

Thanking Telesom Company for their Sponsorship , the chairman of the Somaliland Football Federation (SFF) Mohamed Amin “also revealed that the giant Somaliland telecommunications company has also agreed to make this tournament an annual event.
The SSF chief also informed that the inaugural 2018 and now to be annual Telesom football championship shall in the coming year extend to involve teams from all over the country thence a national event unseen in Somaliland before.

While briefing On the tournament that took 2 months to completed the SSF boss said that that it was three levels structured thence three competitions in one and involving 62 matches played by 29 teams and 850 players.
“With this Telesom Football championship not only were players exposed to competitive challenge but City residents were entertained to the fullest” said the SSF chief adding that the 2019 tournament shall be even better.
Upon Thanking all participating teams and spectators most of whom never missed any of the 62 matches played during the Telesom football championship and congratulating the winners and runners , the Telesom public relations manager Mohamed Abdi Darbo Said
spoke about the eventual conclusion ceremony,“Our company (Telesom) has always dedicated to the youth of Somaliland and this tournament is just a token of this dedication” adding that the thinking behind sponsoring the football competition was geared towards
“ creating avenues to deter our youths from tribalism, joblessness and the interest of illegal migration to foreign countries” adding that the success of the inaugural 2018 Telesom football championship has motivated the telecommunications company to entering into an annual sponsorship contract with the SFF and HCTV.
Said he “ we promise to hold similar completions annual and at a national level as well from now henceforth ”
At the same function at the Hargeisa stadium the Somaliland Minister of Youth and Sports Boss Mire Mohamed thanked Telesom for their sponsorship, SFF for organizing and management and HCTV for matches airing”
“I also take this opportunity to thank all participating teams for their sportsmanship and discipline displayed during the two months Telesom
While congratulating the winning Hargeisa Municipality and runners up Prisons Service football teams Minister Mire told the other participating teams not at the winners podium to take heart and practice much for anything can happen in the next Telesom football championship of 2019.

About the Sponsors
Telesom is a private telecommunication company which was established in the year 2002 by local entrepreneurs in Hargeisa Somaliland to become the leader and pioneer in telecommunication sector while utilizing the latest technology and employing a highly trained and professional customer care team that satisfy our customers with world class services.

Telesom Company offers an integrated suite of communication products and services to the customers including, Mobile voice and data, ZAAD (mobile money payment) Mobile Internet (3G/GPRS), Dhambaal service, Ila hadal, Ila maqal, Mushaax, Aqoonmaal and many more. Telesom has played a major role in the economic development of the country plus the creation of significant huge employment opportunities. The company has the widest network coverage in Somaliland, delivering its quality unmatched services across the country.

The company operates in entire Somaliland, where it has the widest coverage network. Telesom has affiliation with neighboring country’s biggest Telecommunication companies and also share regional and international Roaming service with them. For more company details visit http://www.telesom.net/pages/home