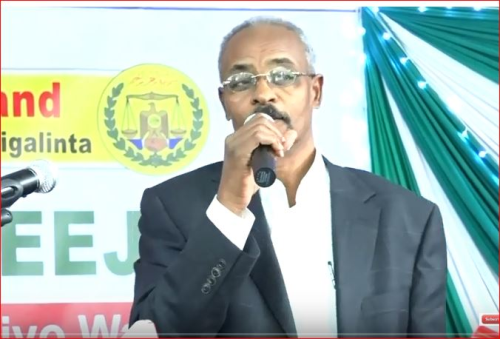 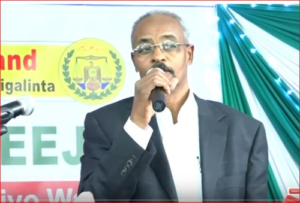 HARGEISA–The government has issued a stern warning to the opposition national party to respect the country’s election laws.

This is according to a press release from the office of minister of information, culture and national guidance Mr.Abdirahman Abdillahi Farah (Guri-Barwaqo) which Somaliland News Agency disseminated.

“This country belongs to all people of Somaliland hence it is important for all of them to respect the laws of the land. For instance the current Somaliland Electoral Commission came into being through a legitimate law after the executive and legislature consented on the seven commissioners who were drawn from the three national political parties. They even oversaw the 2017 presidential election.  The elections exercise is a competition between political parties and after the election there is only one victor announced by the national electoral body so it is prudent for the competitors to respect the decision of the referee which is the Somaliland Electoral Commission (SLNEC). We have to follow the rules and regulations we have set to govern ourselves or else we shall become a people who do not respect the laws they have made.”

The Somaliland Electoral Commission (SLNEC) has term limit enshrined in the constitution their appointments and retirements has well been defined in the election laws.

The minister added that it was wrong to remove the electoral commissioners before the expiry of their legitimate tenure.

Minister Guri-Barwaqo said “If every losers wants the electoral commission to be sacked this will ruin our country and democratic system since we will become a people without principles.”

The minster went on to say that he is quite perplexed by the opposition National Party (Wadani) who honorably accepted their defeat in the 2017 presidential election now allege that the election was rigged.

“How will the international community gauge us when we blindly by pass the set electoral rules and regulations?” Minister Guri-Barwaqo quipped.

“During the last presidential election we allowed international election observers to monitor our elections they were drawn from 27 countries their leader was Mr.Michael Walls, who returned to the country last month. However it a primitive threat by cross-section of Wadani supporters to warn Mr.Michael Walls from setting foot into the country. What impression is the opposition National Party (Wadani) giving to the international community? They want to drag the name of Somaliland and what it stands for in the mud.”

The minister informed Mr.Michael Wall and other person wishing to visit Somaliland that they are welcome. He said Somaliland is a country that represents peace and hospitality to visitors and  not even the opposition  could stop that reality.