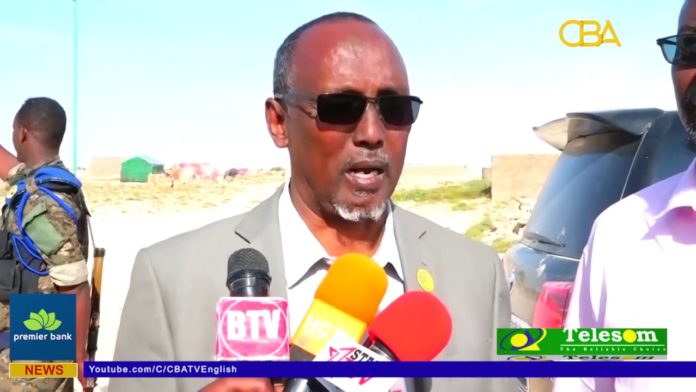 This will put an end to four years of inter clan skirmishes in the district that claimed dozens of lives.

Today the minister of national planning congratulated on the district the hard earned peace and urged community to safeguard it.

The minister also called upon the expatriate community to refrain from jeopardizing the peace efforts.

He encouraged them to let the people of the region to solve their problems since they are the ones who suffered in the scorch of the conflict.

” I will address the diaspora community in particular. Diaspora people used to help the country alone. The nation is waiting your assistance. Today they cause many problems. I am telling you. Leave the solutions of these problems people living with them. If you are not part of the solution. Don’t be part of the problem.” said the panning minister

The minister promised that the gov’t will not spur any efforts to help secure the hard earned peace and assist the people to rebuild their lives after the conflict.

Abdirahman Aden Wayd, head of the peace building committee urge the diaspora community to contribute to the development of the district and to spend in rebuilding what they used to spend on conflict.

“Another issue I plea to the diaspora community from El Afwein. Fear God and spend peace what you used to spend in conflict. Many development projects will start in the city be it education, health, building hospitals, roads. Be part of that.” said Abdirahman

Abdirahman said people of the district now need development to appreciate peace. He called on the gov’t to invest in delivering services such education, health and water.