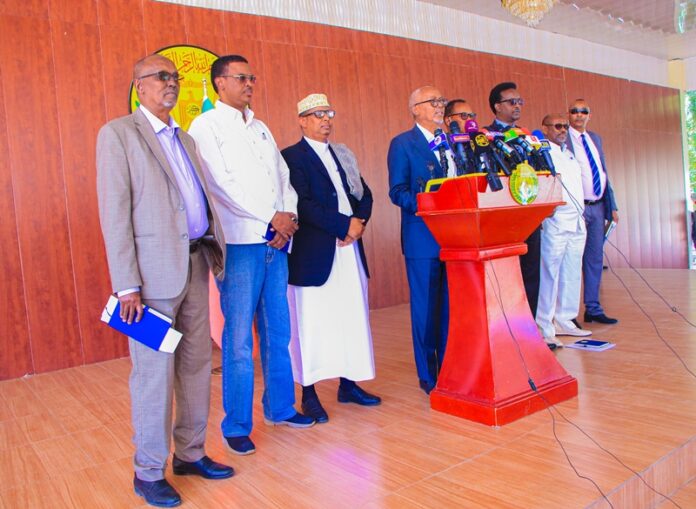 The National Drought Rescue Committee of the Republic of Somaliland, has on Thursday 13th Jan, 2022 officially declared a severe drought pertain in the country, affecting 810,000 people.

The committee, which was recently appointed  by the President of the Republic of Somaliland, H.E. Muse Bihi Abdi, and is leading by the Vice President of Somaliland, H.E.. Abdirahman Abdillahi Ismail (Saylici), at a press conference stated that there is a severe drought situation in the regions and districts of the country, and  issued a press statement detailing the extent of the drought and the measures planned by the committee and the alarm calls sending to UN, INGO, LNGO and World, and Somaliland businessmen  as follows:

Following the sporadic Gu rains in parts of the country, and the failure of the Deyr rains, there is evidence of drought in the country.

The National Drought Rescue Committee (NDRC) has launched a series of initiatives to address the issue of drought relief in Somaliland.

NADFOR has prepared food stocks for the drought affected people.

Following the report of the drought situation, I declare that there is a drought situation in the country that has impacted all regions of the country such as: Sool, Sanag, Togdheer, Sahil, the Marodijex area, and the coast of Awdal region. The drought impact assessment has directly impacted 810,000 people in need of emergency assistance such as water, food and medical care, and is also expected to impact approximately 1,200,450 people over the next four months.

To address this situation, the government has allocated $ 3,000,000 (Three Million Dollars) for food, water trucking and rehabilitation of damaged wells.

I urge the regional drought relief committees to be prepared to play their part in addressing the current drought situation.

I call on the people of Somaliland to join hands, help each other, and work for their own good, and pray to God to lessen us from the drought and protect us from its disease and tragedy.

Therefore, from today, I would like to inform you that anyone who wants to address the drought in the country must channel through the National Drought Rescue Committee.

Finally, I pray to God to diminish the drought and pour out his mercy on us.