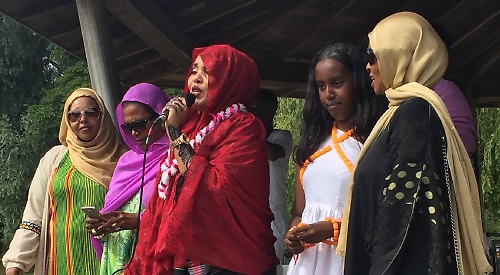 About 40 representatives of the Henley Borama Friendship Association, which celebrates the town’s partnership with the city of Borama in Somaliland, performed by the bandstand on Saturday afternoon.

The delegates, who either lived elsewhere in Britain or had come from abroad and were staying with host families, wore colourful traditional dress or t-shirts bearing the slogan Borama Comes To Henley, the name of the event.

Onlookers sat in deckchairs provided by the town council while chatting and enjoying ice creams, and a camera crew from Borama filmed the proceedings for television back home.

The celebration was taking place for the fourth time after being called off last year because Borama had been hit by a tropical cyclone which destroyed homes and killed up to 60 people as well as livestock.

A dance display was felt to be inappropriate so the Samasons Relief charity, which was set up by Somali refugees living in the UK, held a small exhibition outlining the impact and collected for a relief fund instead.

This year it was raising money for the Annalena School for the Deaf, which was set up in Borama in the Nineties and is now struggling to keep afloat. Its work is vital because deaf children face discrimination and struggle to find work when they become adults.

Henley deputy Mayor David Eggleton, who attended the display, donated £100 towards the appeal. The visit was also raising money for the Tusmo youth development charity and Adal Global Unity, both of which are based in Somaliland.

It started with an address by Hussein Ige, the charity’s chairman, and Brigadier Malcolm Page, of Ancastle Green in Henley, who founded the friendship association in 1983 after serving in the Somaliland Scouts.

Safia Tusmo, a former Borama resident who now lives in America, recited a type of traditional sung poetry named Buraanbuur before the dance display started to music played over a public address system. Brig Page was presented with a small embroidered plaque celebrating the friendship link.

Henley town and community manager Helen Barnett said: “It was very jolly once it got going and we were pleased to help them raise money for a good cause as we’re lucky not to suffer the hardships many other countries suffer.

“It was a lovely celebration of Borama’s culture and we are very much hoping to reinvigorate the friendship link. It would be nice to have children in Henley primary schools making pen pals and finding out about life in a country where children have to balance education with working from a young age.”

The first Borama Comes to Henley event was held in Market Place in 2014 and it was repeated in 2016 and 2017. Borama is in the Awdal region on the western boundary of the former British protectorate of Somaliland, now the unofficial republic of Somaliland.