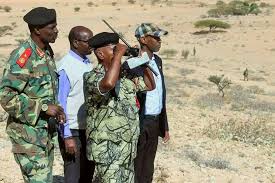 Rebel militia fighters loyal to renegade Khatumo faction leader have launched last night a surprise assault on base manned by Somaliland defense forces stationed in Tukaraq township, which is part of Sool region in the east of the country. The two sides used all sorts of weapons during the army clash with the rebels. Militia officer has confirmed the raid that his militiamen conducted the raid but it is quite hard to confirm any casualties from both sides. The rebel fighters, the remnants of Khatumo is led by the so-called renegade Colonel Faisal Falaalug. Somaliland has not so far spoken of the skirmishes between the defense forces and militia fighters. The former Somaliland President Ahmed Silanyo inked a peace deal in later 2017 with the Khatumo leader, Mr. Ali Khalif Galeyr in Ayn which ended years of hostilities that claimed the lives of many innocent civilians in the region during past skirmishes. The Agreement paved the way for Khatumo fighters to be integrated into Somaliland defense forces and are currently fighting side by side with Somaliland forces. It is for sure that Puntland is backing the renegade colonel, Faisal who is trying to instigate chaos in Somaliland by attacking Somaliland army bases in Sool region.