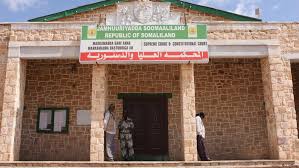 HARGEISA—Despite their pleas for leniency and showing a sense of compassion, the provincial appellate court in Hargeisa sentenced two men to 8 years behind bars today. The two men, Mr. Said Mohamud Gahier and Mr. Ma’alin Nur Mohamed have been in police custody for 10 months. Regional court in Hargeisa could not pass a judgement over the case due to insufficient evidence but the case was transferred to the appellate court. Two other men remain fugitive as far as the appellate court verdict is concerned.