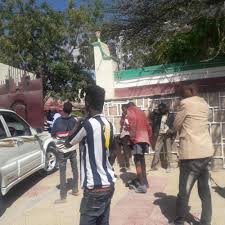 HARGEISA– Marodi Jeh appellate court on Thursday has freed a group of street children locked for staging peaceful protest outside the ministry of labor. Opposition Wadani party enlisted a lawyer to help free the street children who were serving jail terms in Mandhera prison. Mr. Mubarik Abdi who was the enlisted lawyer has said the regional court sentenced the jueveniles to months of imprisonment. Having the party youth members paid a courtesy call to the juveniles said that they lived in appalling conditions and were languishing in jail. They called that they should be shown a high sense of compassion and set them free. The minister of labor tasked commission to oversee if the children were below the age of standing trail or jailing the kids. The case has sparked serious debate among the public.