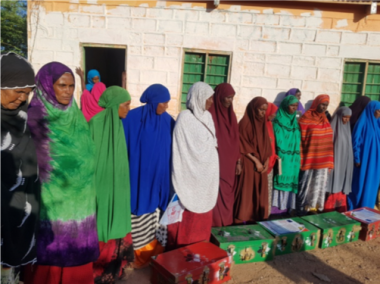 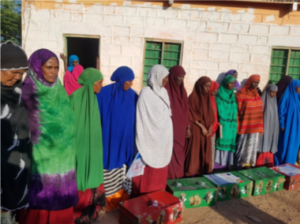 The long and bumpy road is dotted with livestock such camels, goats and donkeys that wander across the arid landscape of Somaliland, an autonomous region in Somalia.

In this part of the world, lack of rainfall means no harvests, no drinking water – and sadly often enough – no life. Due to prolonged droughts and conflict, thousands of people have become homeless and lost livelihoods and

One of the places our team visits is the Aden Suleiman camp for internally displaced people, which has become home for hundreds of families fleeing hunger. Here, I meet some women who have fled drought-stricken villages after their livelihoods where destroyed.

Almost all lament the loss of their livestock. And to understand their grumblings, one needs to learn how central livestock are to the way of life of Somalis. The livestock sector is the nucleus of the economic and cultural life of the Somali people. It provides food and income to over 60 per cent of the country’s population, according to experts.

Livestock reared in Somaliland are shipped to various countries in the Arabian Peninsula and trekked or transported to markets in Kenya, Djibouti, and Ethiopia bringing in a huge chunk of the nation’s income. Furthermore, livestock is a key local consumption commodity for household food security.

So, for the ladies at Aden Suleiman camp who have lost livestock, a sense of despair hangs in the air.

Hope has however sprung for some after they received support through a programme run by international children’s charity World Vision. These women have become some of Aden Suleiman camp’s most progressive entrepreneurs as they now run small shops selling all sorts of basic necessities, household items and food. The project helps women increase their savings and access small loans, enabling mothers in the community to generate income, plan, and contribute to the overall well-being of their families.

It’s undeniable that these women have a remarkable strength of character. However, resilience alone is not enough to overcome the challenges people affected by natural disasters face every day. This is where humanitarian agencies and the international community have a role to play.

Poor rainy seasons have pushed communities in Somalia on the brink of famine. Millions of people are food insecure, and loss of livestock has reduced household income and therefore access to food and water. The United Nations estimated in August that more than 5 million people need urgent assistance in the country. According to World’s Vision data, more than 300,000 children under five are acutely malnourished.

The humanitarian situation in Somaliland – and across most of the horn of Africa – remains dire, yet the response to the crisis remains largely unfunded.

World Vision’s efforts to support small groups of resilient women is already showing signs of transformation of communities, but more has to be done at a global level. The international community should invest more in projects that enable aid agencies such as World Vision to scale up their work and assist millions of people affected by the drought in Somalia, and other countries across East Africa.