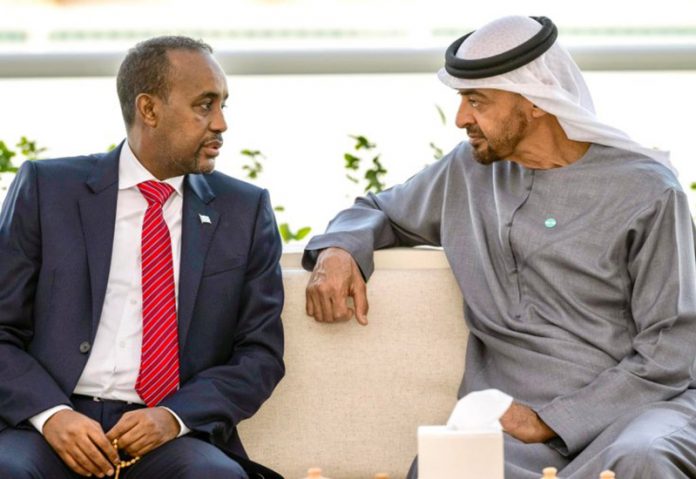 Somali Prime Minister Mohamed Hussein Roble met on Tuesday the Crown Prince of Abu Dhabi Mohamed bin Zayed to discuss key bilateral and regional issues, days after he had arrived in the UAE for an official state visit, his office said.

Roble and bin Zayed focused on strengthening diplomatic relations between their countries whose ties had plummeted to a new low in 2018 when Somali authorities seized UAE cash at Mogadishu airport, accusing the Emirati government of interfering in the Horn of Africa country’s internal affairs.

It comes amid a dispute between Roble and Somali President Mohamed Abdullahi Farmajo, a key all of Qatar, UAE’s arch-rival whose influence in Somalia’s politics has kept other Gulf Arab countries at bay over the past five years.

Roble thanked to the United Arab Emirates for a recent aid shipment meant for the drought-affected Somali citizens while the Abu Dhabi Crown Prince appreciated over Mogadishu’s decision to apologize over the seizure of $9.6 million in 2018, Somali Premier’s office said in a statement.

During a state visit, the first by a Somali government official to the UAE since 2018, Roble has met with a number of top Emirati officials, including his counterpart Mohamed bin Rashid Al Maktoum, State Minister of UAE Foreign Affairs and Abu Dhabi Crown Prince.