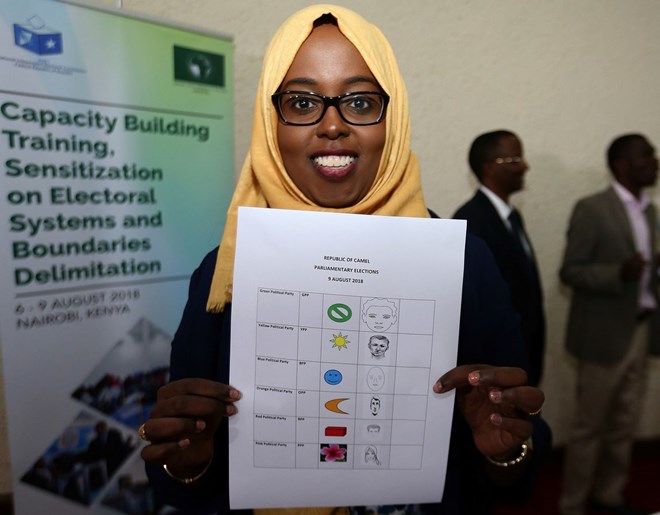 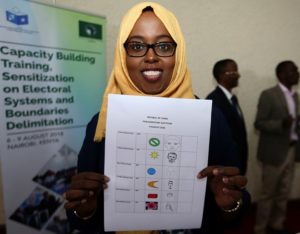 The capacity building workshop is the third in a series of electoral seminars that have been convened for the National Independent Electoral Commission (NIEC) and stakeholders, by the Addis Ababa based African Union Commission and the AU Mission in Somalia.

“It calls for clarity in strategy and clarity in vision as to where you want to go and how you will arrive there to have a neutral system that will be embraced by everyone,” observed Mr. Simon Mulongo, the deputy Head of AMISOM, during the closing ceremony of the workshop, in Kenya’s capital Nairobi on Thursday.

Mr. Mulongo called for a constitutional framework, which clearly defines the powers, obligations and responsibilities of electoral actors and delineates electoral boundaries.

Inclusivity of minority groups, such as women and underrepresented communities, featured prominently at the workshop, which was also attended by representatives of newly registered political parties.

“We would not only like to see the promotion and protection of human and peoples’ rights, but also, that we consolidate democratic institutions and culture to ensure that there is good governance and rule of law in our beloved country Somalia,” said the deputy AU Special Representative for Somalia.

Ms. Halima Ismael, the NIEC chairperson acknowledged the depth of knowledge derived from the training. She said the workshop was crucial in shaping the work of the electoral commission, ahead of the envisaged one-person-one-vote elections.

“This election belongs to all of us (Somalis). Everyone here holds a stake in turning our vision for universal (adult) suffrage in 2020 into a reality,” Ms. Halima told participants at the workshop. “We either can lead our people to the polling station; or we can continue on this same 4.5 road. To choose, is ours,” she remarked.

Although Somalia adopted the 4.5 clan-based voting method in the 2016 electoral process, electoral stakeholders and partners are working towards universal suffrage in the 2020 elections.

“The kind of electoral system they are going to choose will also impact on the nature of whether they will have to engage in electoral boundary delimitation and of course it will also shape whether it will contribute to strengthening of political institutions, and processes, but also political stability for Somalia, because electoral systems, when they are well-selected in such a post-conflict state, they can contribute to reconciliation and inclusive politics and governance,” Mr. Robert Gerenge, the Principal Advisor for Election Management Bodies, in the Department of Political Affairs of the African Union Commission said.

The chairperson of Wadajir Party Mr. Kamal Gutale, urged participants at the workshop to consider and implement ideas discussed over the four days of training. “It was the first time that the newly registered political parties were participating. We have learnt the different models of elections from countries that have been in similar post-conflict situations like Somalia,” Kamal noted.

His sentiments were echoed by the HirShabelle Minister of Interior and Local Government, Mr. Mohamed Ali Adle. “It was beneficial to all and we have learnt many things. It will be a new dawn for Somalia if the lessons we have learnt in this workshop are effectively implemented.”

Participants were taken through case studies of electoral systems of African countries such as Kenya, South Africa, Nigeria, Mozambique and Tunisia. There was excitement during the workshop with a mock parliamentary election, in which political parties led by female politicians triumphed over their male counterparts.