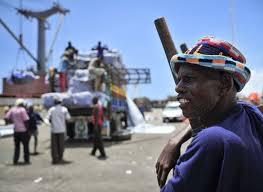 NAIROBI (Reuters) – Somalia’s economy continues to recover, with growth expected to strengthen to 3% in 2019 from 2.8% last year, while inflation could ease to 3% from 3.2% over the same period, the International Monetary Fund said on Tuesday.

Somalia has been in turmoil since 1991, when clan-based warlords overthrew Siad Barre and then turned on each other. Over the past decade it has been hit by famine and sporadic terror attacks by al Qaeda-linked al Shabaab.

“But the outlook remains vulnerable to the still fragile security situation, climate shocks and the still developing institutional capacity, and more is needed to improve economic resilience, increase employment and reduce poverty.”

An Article IV consultation is part of the IMF’s mandate to scrutinise the economic, financial and exchange rate policies of its members.

The Somali government has broadened the tax base and strengthened tax administration, boosting domestic revenue almost 30% to $184 million in 2018 from a year earlier, and to $54 million for the first quarter of 2019, Holland said.