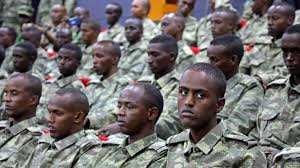 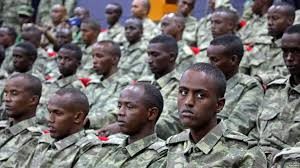 The Chief of Defence Forces (CDF) of the Somali National Army (SNA), Maj. Gen. Abdiweli Jama Hussein ‘Gorod’, has instructed his troops to ensure compliance with the International Humanitarian Law, when conducting military operations in the country.

The CDF warned that soldiers who disregard the law will be prosecuted. He also distributed the “Code of Conduct for Combatants’ to the local army to familiarize them with combat rules, which guides on how to protect civilians and their property, limit destruction and respect civilian property during combat, among other rules.

The Humanitarian Law regulates the conduct of forces in armed conflict and seeks to protect the rights of civilians who are not participating in hostilities.

Senior officials of the African Union Mission in Somalia (AMISOM) joined the army chief and troops to discuss the tenets of the International Humanitarian Law, at the General Gordon Military Academy in Mogadishu on Monday.

“The rules apply to situations of war and these are officers and soldiers who are going to conduct operations soon. The idea is that they ensure compliance with applicable international obligations; rules that protect the victims of war; rules that limit the effects of armed conflict; rules that restrict methods and means of warfare,” explained Dr. Omar Abdulle Alasow, the Senior Advisor to AMISOM on International Humanitarian Law and Human Rights.

Dr. Omar noted, that the briefing was part of a series of trainings being offered by AMISOM to the SNA officers, to improve their knowledge on human rights issues and ensure compliance with the International Humanitarian Law.

He observed that the joint nature of operations between AMISOM and the SNA has compelled the AU Mission to conduct a series of trainings for the army, to create awareness and ensure compliance.

Separately, the Deputy Special Representative of the Chairperson of the African Union Commission (DSRCC) for Somalia, Mr. Simon Mulongo, held a security meeting with the Federal Minister of Defence, Mr. Hassan Ali Mohamed; CDF Maj. Gen. Abdiweli and other top SNA officers. The meeting focused on the implementation of the Transition Plan.

“Our interaction with the Minister of Defence and the CDF is basically to heighten the operational plans for the purposes of executing the transition plan because AMISOM and the SNA are supposed to work together in the Comprehensive Approach to Security of Somalia,” stated Mr. Mulongo.

On his part, Maj. Gen. Abdiweli hailed the collaboration between the SNA and AMISOM, which he noted had allowed for joint planning. He expressed optimism about efforts being undertaken to build the capacity of the SNA to take charge of the country’s security.

“When you want to achieve something, you have to plan and prepare and then you execute the plan and this is part of those efforts,” Gen. Abdiweli remarked. 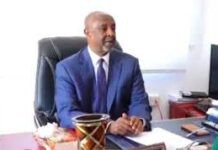