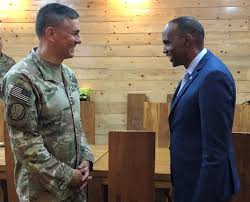 Stephen Townsend, commander of U.S. Africa Command (Africom) who held talks with Hassan Ali Khaire, the prime minister of Somalia in Mogadishu on Wednesday, reinforced the U.S. army’s commitment to mutual security interests in the region.

“Evil doers are out there. They are looking for an opening and an opportunity to do harm. If they could attack U.S. interests and the homeland they would. We can’t give them an opening. We must deny them that opportunity,” Townsend said in a statement issued on Wednesday night after his visit to Somalia.

While in Somalia, Townsend met with the U.S. units responsible for training the Danab, a specially trained Somali military force engaged in the fight against al-Shabab and ISIS-Somalia.

“Along with Somalia and other international partners, we will apply continued pressure on violent extremist organizations. This pressure creates conditions and opportunity for further political and economic development,” Townsend said.

He noted the importance of confronting violent extremist organizations in East Africa, noting that while terror groups in Africa currently lack the capability, they possess the will and desire to attack the U.S. homeland and interests.

The Africom commander visited Somalia as part of his first trip to the African continent since taking command on July 26.

He said the visit offered an opportunity to assess the situation in Somalia while reinforcing Africom’s commitment to mutual security interests in the region.

Charles Bergman, Africom’s integrator for developing security in Somalia, said the unique level of cooperation between the multiple international efforts in Somalia has led to more effective government security forces and their ability to conduct offensive operations.

“This demonstrates to the Somali people that their national Army’s capabilities to secure Somalia are growing,” Bergman added.