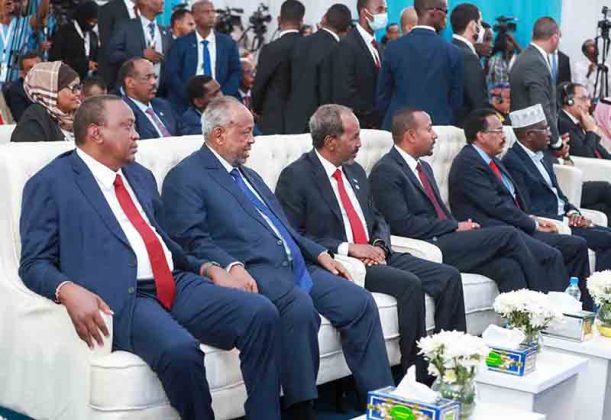 Somalia’s president Sheikh Mohamud was inaugurated on Thursday in a ceremony held behind blast walls at Mogadishu airport, where the leaders of Ethiopia, Djibouti and Kenya pledged closer ties with his administration.

On Wednesday night, mortar shells were fired towards the venue for the inauguration ceremony, hours after a curfew imposed by the government to secure the city had come into force.

Speaking at the event, outgoing Somali President Mohamed Abdullahi Farmajo promised to work hand in hand with his successor and urged Somali citizens to give him a chance to be able to deliver essential public services.

Outgoing Prime Minister Mohamed Hussein Roble called on the international community to stand by the new President to overcome daunting challenges ahead of his administration, including instability, worsening drought and tensions between the political elite.

Hours before the ceremony had begun, the President of Djibouti Ismail Omar Ghuelleh, the Prime Minister of Ethiopia Abiy Ahmed and the President of Kenya Uhuru Kenyatta landed at Mogadishu airport for the first time years. They were seen in a get-to-gether image with new Somali president and his immediate predecessor.

Kenya’s President Uhuru Kenyatta extended his “hearty greetings and congratulations” to Hassan Sheikh Mohamud on his re-election and promised stronger ties with his administration following years of strained diplomatic relations between Mogadishu and Nairobi.

“Mr President Kenya welcomes warmly the peaceful transition of power [in Somalia] and commits to collaborate with you and to support as you champion the development agendas of the Federal Republic of Somalia,”

“My brother dear president, you can count on Kenya as a dependable partner to Somalia and your development agenda.”

“In light of this, the government of Ethiopia is fully behind you in implementing a one-person one-vote universal suffrage in 2025 after 58 years,” Ethiopian leader said.

“My government is committed to working together in a more robust relationship to achieve a better future for our people and to determine destiny together.”

Djibouti’s President Ismail Omar Ghuelleh congratulated new Somali leader and wished him success in his second non-consecutive term, stating that his government will continue collaborating with Mogadishu on mutual interests.

Prime Minister of Egypt, Foreign Minister of Saudi Arabia and State Minister of Foreign Affairs for the United Arab Emirates elaborated on historic relations between their countries and Somalia, during speeches at the ceremony.

Somali president-elect Hassan Sheikh Mohamud, speaking at his inauguration, repeated his slogan of Somalia “at peace with itself and at peace with the rest of the world” and said he would engage in consultation with his predecessors on fundamental issues critical to the success of his government.