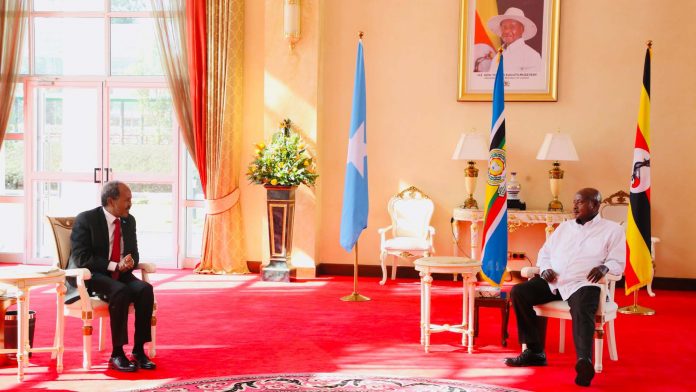 The two discussed issues including ways to strengthen bilateral cooperation on a number of forefronts and efforts to work together on regional stability, Villa Somalia said in a statement.

Members of the two countries’ ministers signed bilateral agreements whose content has yet to be publicly detailed. Outgoing Somali Defense Minister and his Ugandan counterpart were among the signatories of the undisclosed deals.

Uganda has thousands of troops serving the African Union peacekeeping mission in Somalia. Last year, Museveni threatened that he would pull out his forces from the country if Somali authorities and security forces remain unable to shoulder responsibility for the security of their country. He blamed infighting between Somali leaders for continued setbacks in the fight against Al-Shabaab.

In his trip to Uganda, the eighth since taking office in May, Mohamud is scheduled to attend an investment summit that will host Somali and Ugandan businesspeople as well as a host of officials and diplomats from the two countries.