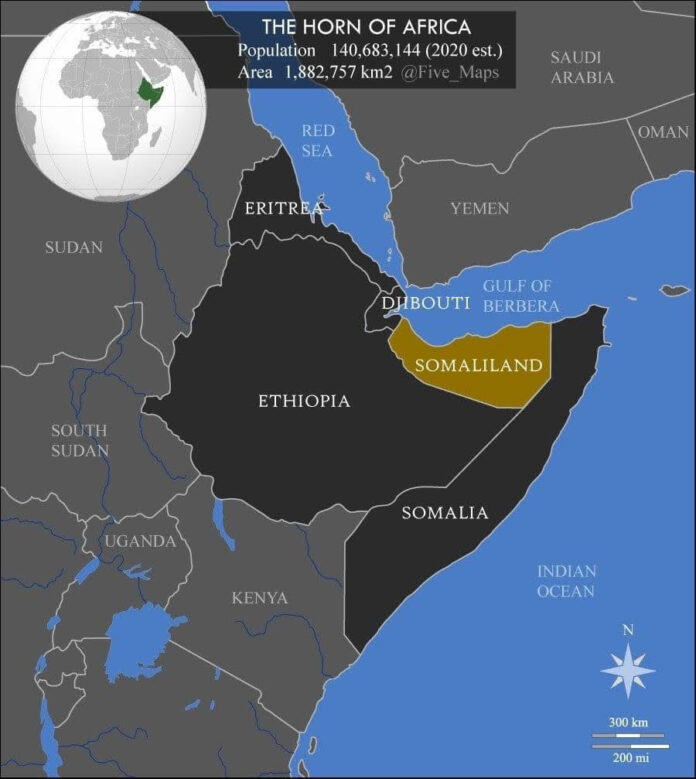 Somaliland is located in the Horn of Africa. It lies between the 08°00′ – 11°30′ parallel North of the Equator (Latitudes) and between 42°30′ – 49°00′ Meridian East of Greenwich (Longitudes). It is bordered by the Red Sea to the North (Southern Coast of Gulf of Aden), Djibouti to the West, Ethiopia to the South, and Somalia to the East. Somaliland has a coastline with the majority lying along the Gulf of Aden (Red Sea). The country is slightly larger than England, with an area of 176,000km² (110,000 sq. miles) and with a population around 5-5.5 million.

3. DISSOLUTION OF 1960 UNION WITH SOMALIA

Sharing ethnicity, religion, language, culture, traditions, color etc do not determine the creation of union or federation or preserve the existence or survivability of union or federation but only fair power-sharing and justice determine the success and survivability of union or federation and that is what Somalia failed to understand and respect during the 30 years of the failed union (1960-1990). Somaliland people endured 22 years (1960-1982) of power-sharing denial, oppression and injustice and 8 years (1982-1990) of all kinds of human rights abuses, atrocities and destructions. Those two historical facts ended the union with Somalia in 1991 when Somaliland people reclaimed their independence achieved on June 26, 1960.

4. AFRICAN BORDERS ARE BASED ON LAND, NOT ON CLAN LINEAGE

There are no clan or tribal borders in Africa but there are state or national borders only. Borders of countries are based on land, not on clan lineage or tribal origin. The territory, independence and recognition of each African country is defined by its colonial power-drawn borders. The political map of Africa showing African countries was made by Europe, not by Africans. Somaliland territory, independence and recognition is based on Somaliland British Protectorate Borders.

The borders of Djibouti, Somaliland and Somalia have internationally the same legitimacy and status for being all colonially drawn borders defining their independence, territory and nation as the rest of Africa. European Colonial Borders define nationalism, independence, statehood and diplomatic recognition of each country in Africa, Asia, and Arab World.

Somaliland Republic is a peace-loving country committed to respect its neighbours and cooperate with them on security and on bilateral social and economic developments. The military doctrine of Somaliland is that any entity, like puntland, which tries to claim parts of Somaliland to change its borders on the basis of tribal lineage or any country which tries to dismember Somaliland territory for aggression shall be confronted with force to repel and defeat such hostile attempt intended to undermine the territorial and national unity of Somaliland Republic.

Puntland Administration of Federal Somalia continues violating the internationally recognized borders of Somaliland Republic based on Somaliland British Protectorate Borders claiming Sool, Eastern Sanaag and Buhoodle on the basis of clan lineage – which is absolutely unacceptable. Somaliland Republic is committed to defend its country and people from foreign aggression.