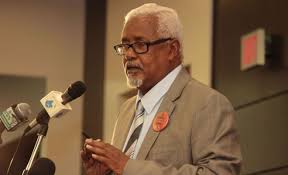 The Somali PM Hassan Ali Khaire has raised the notion that Somaliland would take the presidency and the capital of Somalia in a bid to accelerate the re-unification efforts spearheaded by leaders in Mogadishu.

The Somalian PM made the comments during the recently wrapped up talks hosted in Djibouti between the leaders of Somaliland and Somalia.

This was disclosed by the interim chair of Wadani national party in Somaliland, Honorable Abdikadir Haji Ismail Jirde.

Mr. Jirde who is a Member of Somaliland House of Representtaives has said that this is an instance of the mentality of leaders in Mogadishu who are coping with the troubles in Somalia.

The lawmaker has further added that Somalian leaders believe the doctrine that it is easy as abc to bring Somaliland back into failed union.

He said: ” What they think about is not the unification but they are striving to lure Somaliland back into the disastrous unification. They want the world to compel Somaliland to return to the union without addressing the grave wrongs which are not righted.”

He added that PM Hassan Ali Khaire suggested from the beginning even before the talks commenced that the presidency and the capital will go to Somaliland.

He stated that PM Khaire said so prior to the kick off the stalled talks in Djibouti.

Mr. Jirde went on to say that Khaire believes that we (Somaliland) are people who would be lured into the union once again.

The parliamentarian said that the time is not right to discuss issued concerning unification at the moment. Somalia needs to sort out a lot of its troubles.

He said: ” Somaliland has presidents who were democratically elected, held successive elections, voted for the constitutional referendum. Somalia must set  its house in order and leave Somaliland alone. There is a lot of unfinished business in Somalia that need to be done. Somaliland cannot benefit from the union. The time is not right to address issued pertaining to the unification between Somalia & Somaliland. If we (Somaliland unites with Somalia, it would be the end of Somaliland and Somalia.”

He urged Somaliland President Musa Bihi Abdi to forget about the presidency in the south.

He said that the country and the public are divided.

He said: ” There are a lot of troubles in Somaliland. We are unable to hold elections. Instead of putting a lot of efforts to the talks with Somalia, we must hold our elections. President Bihi must tell the world that Somaliland to hold talks with Somalia once SL is ready. He has inform that the world should not force Somaliland into the dialogue. We know our interests besides Abiy Ahmed, the EU and US as well.”