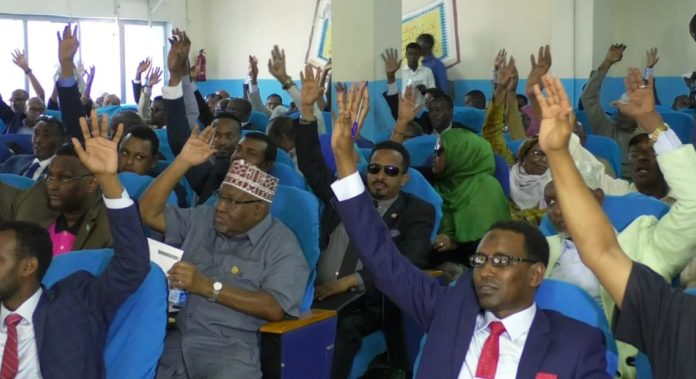 Somali Journalists Syndicate is outraged by the draconian and preventive media bill (as amended) passed by Somalia’s Lower House parliament on Monday, 8 July, 2019 and calls for the Upper House to fully review and open consultations with journalists and media representatives and allow their input added into the bill.

On Monday, 8 July, 2019, Members of the Parliament (Lower House) voted and passed the Media Bill without prior consultations with the concerned groups including journalists’ representatives.

Under the new bill (as amended), media editors and directors will be handed down with a fine of $300 to $1,500 for breaching sections of the new law including but not limited to publishing false news. It also empowers the Attorney General to instruct the arrest and prosecution of critical journalists and media stations.

While the country has seen an increase of the number of private media, the new bill advocates for restrictive measures against establishing new media outlets by imposing deposit of unspecified sum of money which is not part of the registration fees normally paid during registration process.   All pre-registered media houses will be required to seek for a new mandatory registration within 60 days after the bill takes into effect.

In a worrisome trend, the new bill mentions establishment of a nine-member Somalia Media Committee (SMC) by Ministry of information, which will be drawn from the Ministry of Information of the Federal Government of Somalia (FGS) and Member States including Banadir Regional Administration (BRA). The committee will be under complete control and command by the Information Minister.

“We are very worried about this new draconian law which restricts the freedoms of the journalists and that of the media. It imposes a fine of $300 to $1,500 to any editor or director of a media house for violating this law, It gives more powers to the Ministry of Information including registration and vetting of journalists,” Abdalle Ahmed Mumin, Secretary General of the Somali Journalists Syndicate (SJS) said  “Surprisingly, it also imposes the establishment of the so-called Somalia Media Committee, which according to this bill, will be a governmental body drawn from the Federal Government and six member states without giving a single member to the independent journalists and their unions,”

“The Somalia Media Committee is very crucial and we therefore call for enhancement of its independence by limiting the government’s role in appointing the members of this Committee, refraining extension of its member’s term. Importantly, the approval of the budget of the press committee should be under the Parliament- not under the Ministry of Information,” Mr. Mumin added.

Furthermore, the bill obliges journalists to register and get Identification Cards provided by the Ministry of Information, clearly violating the rights of journalists to have their own self-regulatory registration basis. The bill also bars citizen journalists from joining the profession.

Somali Journalists Syndicate (SJS) calls for the Somalia’s Upper House to fully review the press bill, allow journalists’ unions to share their input through consultations. SJS also demands withdrawal of all vague clauses and definitions aimed to limit the press freedoms and the journalists’ rights to exercise journalism including the requirement for the journalist to be authorized or licensed to join the profession.

“All articles requiring content regulations should be removed and redundant definitions such as clauses indicating national interest and fake news should be eliminated. Also there should be no requirements for a journalist to be authorized or licensed to join the profession,” Abdalle Ahmed Mumin, SJS Secretary General added.