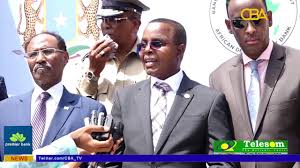 In efforts to increase gov’t collection, Somalia’s Federal Gov’t has opened new in-land revenue district offices in Hodan, Hawlwadaag, and Wadajir districts in Mogadishu.
The opening ceremony of the facility which was sponsored by the Africa Development Bank was attended by the Federal Minister of Finance, Abdirahman Husein Du’ale Baileh and the governor of Mogadishu, OMar Mohamed Filish.
in a bid to raise income revenue and provide social services to the Somali populace, the finance ministry and Mogadishu administration is engaging business and has already convinced them of the benefits of paying taxes.
The in-land revenue department works with a special police unit that helps them the collection of tax drive from business around the city.
It is estimated that hundreds of companies both local and foreign have set up business in Mogadishu and their staff members pay taxes deducted from their monthly wages.
The mayor of Mogadishu praised the current Somali gov’t saying it has played a lion’s share in convincing the business and workers about the benefits of paying taxes.
Mayor Omar Filish added that all gov’t stakeholders need to play their role and reconstruct the institutions in a bid to serve Somalis.
“All ministers of the gov;t of Somalia need to play their role and revive gov’t institutions.
There are ministries whose building have not been re-constructed .
It is now upon the heads of those ministries who build and start working for the people and destroyed gov’t building mean weak gov’t and even of that is not that case.” said Filish.
On the other hand, the minister of finance, Abdirahman Baileh has said that in partnership with African Development Bank that the gov’t will reconstruct other institutions.
“Our target is to ensure that all 13 districts that the mayor talked about are fully constructed and rebuilt. This is part of larger gov’t effort to reconstruct all gov’t institutions. It is not about policies all the time. We need to work on physical structures of governance.” said Baileh
Five other parts collection centers are expected to established in Banadir region in a bid to boost in come revenue collection by the finance ministry in a project supported by the World Bank and the African Development Bank.
The increase of local revenue collection is one of the conditions set by the Int’l Monetary Fund to Somalia’s  for debt relief prosecutor.
Somalia’s overall revenue tax collection total nearly one hundred and forty million dollars in 2017 compared with one hundred and ten million dollar in 2016.
Somalia which has been plagued by civil war over two decades has been grappling with lack of cash and is now determined to collect more tax revenues from its vast ports and other sources to pay civil servant salaries and provide services.