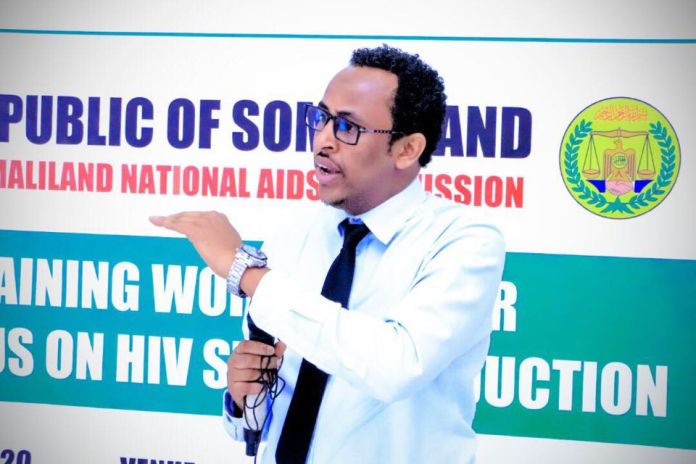 The director made the remarks in a press conference held yesterday at the agency’s headquarters in Hargeisa. Mr. Muhyadin stressed that people living with HIV must take extra precaution against the deadly infectious disease known as Covid-19 which is spreading like a wildfire around the globe. Speaking to local media, the director emphasized that his message aims to reach out to people infected with HIV as this was the third time that he particularly addressed with them not to drop their guard in adhering to the guidelines from the ministry of health and Committee tasked against Covid-19 pandemic. On the other hand, the director warned against people with HIV to heed the messages from other bodies rather than the health ministry which is now overseeing the prevention and response against Covid-19. He went on to say that since the outbreak of Covid-19, the National AIDS Commission took steps to cut work by 60 percent and in return had conducted welfare, helping, supporting  and saving programs for people infected with HIV. Mr. Muhyadin asserted that the National AIDS Commission focused on Caring and Supporting with these vulnerable community particularly people living with HIV. The director said that the agency distributed food parcels within a matter of two months which were benefited by people living with HIV and residing in Marodi Jeh, Sahil and Togder provinces in Somaliland. He highlighted that the commission in charge of AIDS in Somaliland distributed food rations to 200 families. On the other hand, the director called upon the large public of Somaliland to receive people with HIV and to stop marginalizing them. Mother who tested positive for HIV appealed to the commission and to Somaliland government to further increase the aid allocated for them.