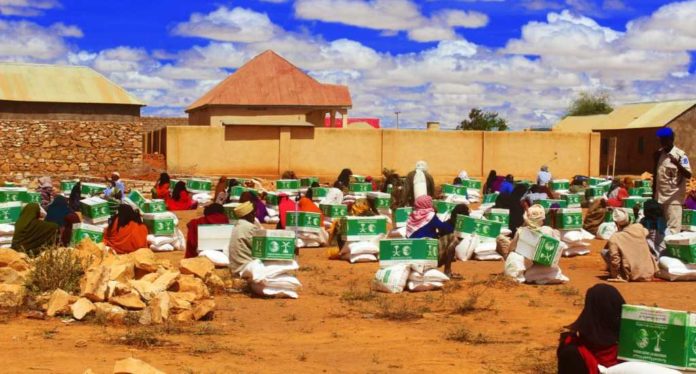 Hon. Sahal Mohamed Jama currently on a working visit in East Sanaag for the past few weeks, distributing food aid on behalf of the National Disaster Preparedness and Food Reserve Agency to more than five hundred families, living in Dhahar district, situated in East Sanaag region.

Residents thanked the Deputy Minister of the Ministry of Transport and Road Development, the Somaliland government, and especially the National Disaster Preparedness and Food Reserve Agency, and appealed to the government to increase development undertakings in Sanaag Region and eastern regions.

Residents said that the distribution of the food rations came at a crucial time and when needed the most, but at the same time urged the government to increase the amount of aid allocated to those regions since whatever was distributed wasn’t enough considering there more people in need in east Sanaag region.

Various local officials in Dhahar District and the District Police Commander said that they had received the food consignment sent by National Disaster Preparedness and Food Reserve Agency from Deputy Minister of the Ministry of Transport and Road Development, and hat the food would change the needs of the underprivileged in the area during the Holy Month of Ramadan.

Deputy Minister of Transport and Road Development Somaliland Sahal Mohamed Jama said President Muse Bihi’s government has done a lot in East Sanaag and shall continue to support and provide other services to the residents of that area.

“I am in Dhahar, today not for politic’s sake or to spread propaganda but to serve the people and distribute food rations from the National Disaster Preparedness and Food Reserve Agency to 500 families who are less than 2% of the people in need. We shall distribute the food ration in an equal and fair manner,” he said.