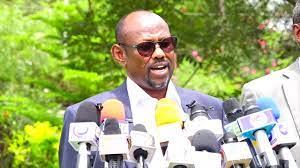 Somaliland’s governing party for the past decade-Kulmiye, has strongly criticized Somalia’s political stakeholders for the non-fruitful leadership.

Kumiye noted that Somalia leaders have failed to make a compromise and reach a political resolution on the election impasse.

Somaliland withdrew from the failed unity with Somalia in 1991 and at the same time declared its independence from the union with Somalia.

Despite its de jure, no single country has recognized it.

In addition, Somaliland has close diplomatic engagements with UK, USA, EU and other regional countries.

The statement from Somaliland’s minister coincides at a time when Somalia is on the brink of descending into a state of chaos after the politicians have failed to bury their differences and return to Afisiyone and resume election talks.