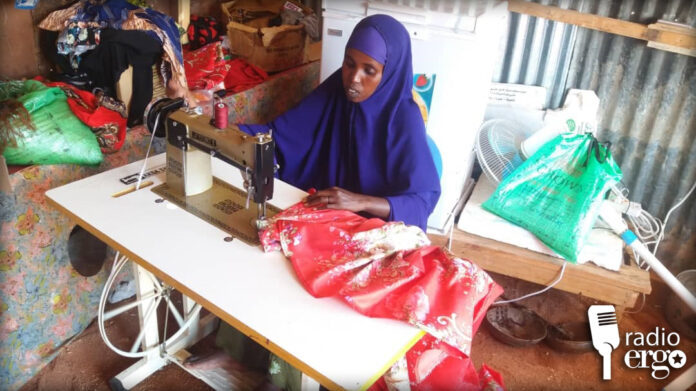 In Radio Ergo’s IDP Camps series, our reporter in Lasanod finds destitute pastoralist women who are using their new-found skills at the sewing machine to better their lives and get out of camps.

“This job has changed my life, it has changed a great deal,” declared Hibo Abdirahman, a mother of four, and one of 25 former pastoralist women from a camp near Lasanod, in northern Somalia’s Sool region, trained in tailoring as a new source of income.

For the past three months she has been earning money from her sewing machine, given to her after a four month training course provided by international NGO, ADRA.

Hibo came to Kalbardale camp, on the outskirts of Ariaddeye, 32 km from Lasanod, two years ago when her family’s herd of 80 goats was wiped out in the drought. Her husband is jobless.

She has opened a stall where she sews men’s and women’s clothing. Hibo told Radio Ergo the family can now afford three meals a day on her income, and she has enrolled three of her children, aged between six and nine, into a school in the town for the first time, at fees of $5 per child.

She is so confident now that she has moved the family out of the camp into a rented two-room house in the town, paying $30 a month.

“I used to live in a hut in the camp, and I used to fear that my children would be eaten by wolves. But today, I don’t fear any of that,” she said.

Kalbardale camp is home to 450 former pastoralist families and is one of four camps in Ariaddeye.

According to Bashe Anshur, one of the camp leaders, services in these camps are extremely limited. The last food distribution people recall was in July.

Some of the camp residents depend on help from their relatives living in the cities and abroad. A few families have a male member working in the town.

There are no schools in the camps, and the nearest health centre serving IDPs and host community with free services is in Ariaddeye town. Some water tanker deliveries are paid for by diaspora funders.

Ismail Abdikarim Mohamed, head of ADRA’s local office, said the training for women was intended to provide skills that they can use to earn a living instead of depending on aid.

“Most of the people in the camps are women. The local elders and the IDP committee helped us in the selection process. Our target was the most vulnerable, in terms of circumstances,” Ismail said.

This year ADRA has trained 56 women in tailoring and henna decorating, 10 men in masonry, welding and carpentry.

Hodan Abdirahman Ali, with a family of six, lost more than 100 goats to the drought in the rural areas of Tuareg. When she came to the camp, she had to ask relatives for help. Her sewing machine is now her lifeline.

“I make $10-15 a day, although there are days when I get nothing, as there are plenty of sewing machine operators,” Hodan said.

The competition and sustainability of the work is less important to her, however, than the opportunity to earn her living independently and no longer to feel like a displaced person.