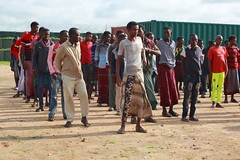 It follows the completion of the recruitment exercise conducted by AMISOM and the Somali Police Force (SPF) last month in Hiiran and Middle Shabelle regions.

“The training for the second batch of police recruits has commenced. The exercise will take three months and the aim is to graduate professional police officers who will be able to secure and protect HirShabelle State in accordance with internationally accepted policing standards,” said AMISOM lead trainer, Superintendent of Police, John Hamweene.

The exercise, funded by the United Nations Office for Project Services (UNOPS), is being conducted by AMISOM Police in partnership with the Somali Police Force, and HirShabelle state administration.

The group is the second batch of the planned 800 officers the HirShabelle State intends to recruit under the grand programme supported by various partners, among them, the German Federal Foreign Office, AMISOM, United Nations, European Union and United Kingdom’s Department for International Development.

The first batch, comprising 200 police officers, graduated early this year and was deployed to various parts of the region to maintain law and order.

The German government is one of the main donors of the Joint Police Programme (JPP), which supports priority police projects as outlined in the Federal and State Police Plans and Somalia’s National Security Architecture that was endorsed by Somalia’s political leaders in April 2017.

Early this year, the programme received a funding boost of 8 million Euros under a partnership between Germany and the United Nations in Somalia.

Mr. Hussein, who was the chief guest during the ceremony, urged the recruits to maintain the highest levels of discipline and to ensure that they complete the training ahead of deployment to various police stations.

“You must maintain discipline, patience and tolerance during the training period. You are educated youths who are highly qualified and I am sure the trainers will find you valuable,” he observed.

The deputy president expressed optimism that the recruits will help secure the federal member state once they complete the training, adding that security was a major priority for the current administration.

“Security is one of our priorities and can be achieved by having a strong security force that is capable of securing the country, enabling residents to live in peace and improve their livelihoods,” he noted.

Mr. Hamweene said securing of main supply routes from terror groups like Al-Shabaab will ease the movement of goods and services and help develop the agriculture-rich state.