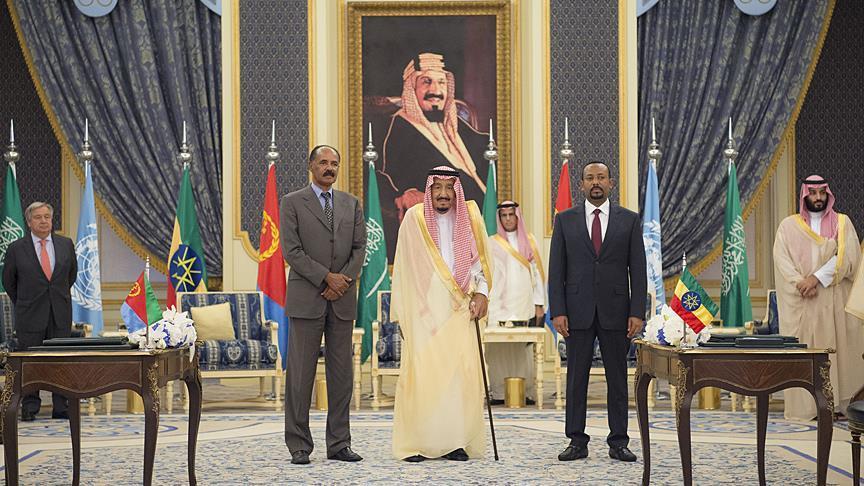 By mediating conflicts and combining their assets in the Horn of Africa, Saudi Arabia and the UAE are slowly cementing an arc of political influence across the region.

On September 16, Ethiopian Prime Minister Abiy Ahmed and Eritrean President Isaias Afwerki signed a peace agreement in Jeddah. This move, initiated by Ahmed’s election and supported by intense UAE and U.S. back-channel diplomacy over the past few months, is putting an end to a decade of war and tension between their two countries. The next day, Saudi Arabia also hosted the first face-to-face talks between Eritrea and Djibouti after more than a decade of border disputes, following a peace agreement the two countries had signed on September 6. Saudi mediation was warmly welcomed by Djiboutian President Ismail Omar Guelleh, who declared in an interview with Asharq Al-Awsat that Saudi Arabia’s role was key to normalizing Djibouti’s relations with Eritrea.

This role played by Saudi Arabia and the UAE shows an increased willingness from the close Gulf allies to appear as a regional stabilizing actor and peace-broker in the Red Sea and the Horn of Africa. By doing so, and by skillfully combining each other’s relations and assets in the Horn, the UAE and Saudi Arabia are slowly cementing an arc of political influence across the region.

After a relative loss of strategic importance following the end of the Cold War, the Red Sea and Horn of Africa area has progressively regained its relevance over the past decade to again become an arena of regional and global rivalries. Saudi Arabia, the UAE, Iran, Turkey, Qatar, Israel, Egypt, China, and Russia have competed to deepen their political, economic, and security influence in the region. For Saudi Arabia and the UAE, the priority so far has been to keep Iran’s influence away from their immediate neighborhood. But the Horn has also gained strategic significance due to the Yemen conflict, and this ambitious power couple has increasingly shown interest in projecting geopolitical clout in the region.

In the context of race for influence, the Horn of Africa has been a theatre for Turkey’s and Qatar’s increased rivalries with Saudi Arabia and the UAE. In Somalia for example, where Qatar and Turkey support the central government, the UAE has enhanced its economic and military relations with semi-autonomous states such as Somaliland, Jubaland, or Puntland, undermining the power of Mogadishu. The spillover of these Gulf rivalries could have potentially strong destabilizing effects to a region already fragile. However, the Ethiopia–Eritrea rapprochement appears to offer the potential for more positive and constructive influence by the UAE and Saudi Arabia in the region and reflects a strong convergence of interests between the four countries.

Eritrea, which is looking to break its diplomatic isolation, hopes that the truce with Djibouti could help end UN sanctions imposed for not withdrawing troops from the countries’ disputed border. The country has sent about 400 soldiers to support the Saudi-led coalition in Yemen. Eritrea also hosts an Emirati military base near its port of Assab, a crucial foothold for the Yemeni conflict, getting in return much-needed aid and international recognition from its Gulf partners.

Ethiopia, on its southern border, is Africa’s second most populous country and one of its fastest growing economies. But since the closing of the border with Eritrea in 1998 left it landlocked, it has been entirely dependent on the port of Djibouti. A rapprochement with Eritrea would lead to a renewed access to Eritrea’s ports, which would greatly benefit both economies, but also their Gulf partners. Indeed, the opening of the border and the booming infrastructure needs in Ethiopia will generate important investment opportunities. Dubai Ports World is looking to help develop the commercial port of Assab, and in August 2018 the UAE announced a pipeline project linking Addis Ababa in Ethiopia to Assab in Eritrea. Moreover, this will provide the Emiratis and Saudis with better access to Ethiopia’s agricultural production, which is key to their food security. Following the Eritrea–Djibouti rapprochement, the Saudis could also be well placed to mediate the current dispute between Djibouti and Dubai Ports World over control of the port of Doraleh.

Djibouti, which currently provides Ethiopia’s only access to the sea and whose port manages over 95 percent of Ethiopia’s trade, appears to be a loser in the Eritrea–Ethiopia rapprochement. However, the talks Saudi Arabia hosted between Eritrea and Djibouti aimed to reassure the latter, with whom Riyadh has a good relationship and where it is currently constructing a military base.

Playing on the convergence of interests between Eritrea, Ethiopia, and Djibouti the UAE and Saudi Arabia are skillfully benefiting from each other’s relations and assets in the Horn of Africa to play their role of mediators. While the role played by the UAE and Saudi Arabia in the Ethiopia–Eritrea rapprochement has been largely welcomed by the international community, it remains uncertain whether the two countries can play a long-term stabilizing role in the region.

While the UAE especially has displayed an increasingly sophisticated diplomacy and a noticeable capacity to mediate rivalries, its foreign aid policy remains driven by a transactional logic that seeks rapid returns on investment but lacks long-term strategic vision. Its behavior in Somalia shows that its desire to assert hegemony over regional rivals still sometimes prevails over stabilization efforts. Meanwhile, its engagement with authoritarian regimes helps legitimize and perpetuate political status quos that may not be compatible with the region’s long-term stability.

While the role of Saudi Arabia and the UAE in the Eritrea–Ethiopia rapprochement is a positive step that should be encouraged, geopolitical rivalries as well as wider authoritarian tendencies and the unpredictability of Gulf foreign policy could still provoke destabilizing reactions across the Horn of Africa more broadly.

Camille Lons is a program coordinator with the European Council on Foreign Relations (ECFR) Middle East and North Africa Program. Follow her on Twitter @CamilleLons.