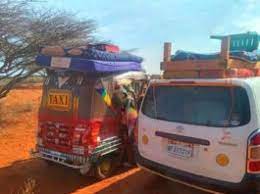 Residents fled their homes as gov’t troops and Galmudug regional forces close in on the town of Guriel in central Somalia, weeks after it had taken control by fighters of Ahlu Sunna group.

Coalition forces approached the town in different directions after receiving reinforcements from Mogadishu.

A number of planes carrying troops and weapons arrived in the region over the past days.

Pictures showed residents carrying their possessions after fleeing their homes due to the fear fighting between government troops and Sufi fighters.

Ahlu Sunna fighters set up defense lines in and around the town, in what some local elders warned could lead to civilian casualties and destruction of properties.

Ex-regional security minister said Galmudug president planned large scale offensive aimed at flushing out Sufi fighters from the town while its leaders are committed to resolve the matter by peaceful means in a bid to ease tension.

Ahlu Sunna accused regional president of turning a blind eye on the fight against AL Shabab.