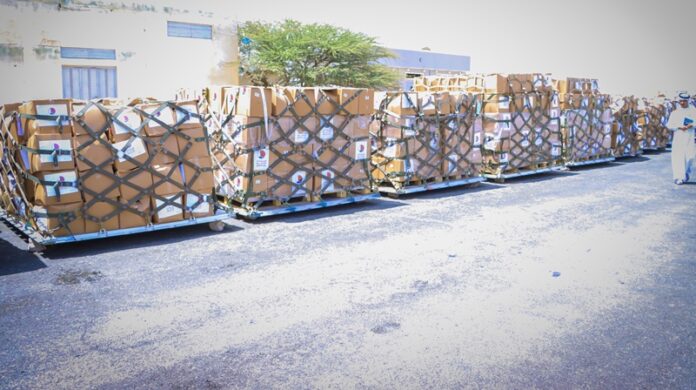 The Fire gutted Waheen Market recovery efforts continue to receive support from sympathetic foreign governments, institutions, bodies and individuals.
Latest to pledge support towards reconstruction of Hargeisa’s main market, succour to the 2000 Small market entrepreneurs and over 5000 employees who lost their source of livelihoods is the government of Qatar.
This was revealed following a market inspection tour by a Qatari delegation led by her envoy to Somalia Amb. Hassan Bin Hamza Hashem.
The Ambassador Hashen led team was received by the Somaliland Vice president Abdirahman Abdilahi Ismail ‘Sayli in Hargeisa.
The Doha dispatched delegation led by the diplomatic Included Fahad Al-Dehemi, Qatar’s International Aid Officer, and Youssef Al-Mulla, Qatar’s Humanitarian Aid Researcher, and Ali Abdullah Al-Dabbagh
Qatar’s market damage assessment tour was facilitated by VP Sayli together with some cabinet ministers , Hargeisa Municipality civic leaders and members of the Waheen market recovery taskforce.
The visitors met and held discussions with volunteer workers clearing the market of debris resulting from the fire that devastated stalls that saw over $2b worth of goods destroyed.

Upon first hand familiarization with effects of the fire the Qataris who expressed grief over the loss of property in Somaliland also sympathized with the affected small businesses.
At the site from where they distributed emergency food aid to 750 of the most vulnerable of the affected traders families the government of Qatar also pledged to fully support the short and long term market recovery efforts.