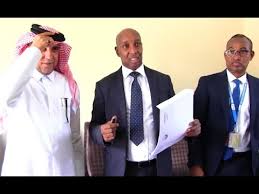 The United Nations has been controlling Somalia’s airspace from neighboring Kenya since 1992 a year after the the civil war erupted in Somalia.

The Head of the country’s Aviation Authority, Ahmed Moalim thanked the Qatari gov’t for its good gesture and cooperation.

He added that the donation was timely.

“We are very thankful to Qatari gov’t for this donation. It shows how important partner Qatar is to us. It is important to know that we have started works on all airports and airstrips around the country. We are hopeful that the project will end soon as well.” said Ahmed

Somalia’s Civil Aviation and Air Transport Minister, Mohamed Abdilahi Salad told reporters at the function that the gov’t will upgrade and build local airports around the country.

Omar also said that the gov’t of Qatar has promises to work with his ministry of the Federal Gov’t of Somalia.

“After conducting investigations and analysis  the civil aviation of Qatar has considered in helping us in equipping our offices and providing the machines and materials that the Somali civil aviation authority needed. We are very thankful to Qatar and its people.” said Omar